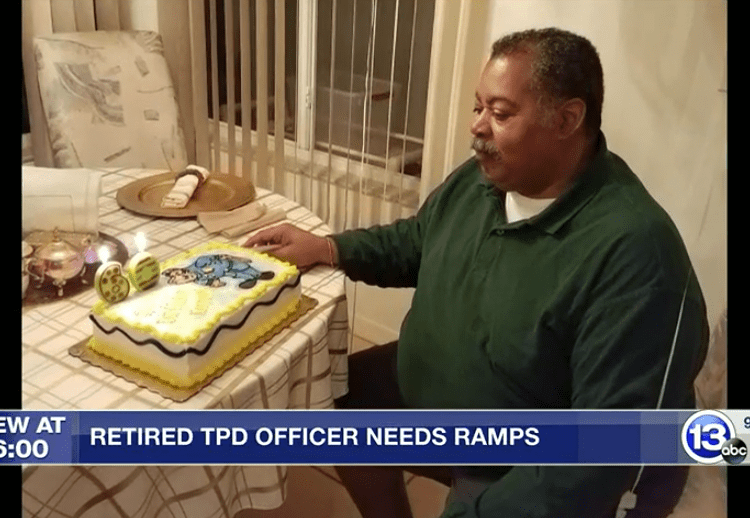 TOLEDO, Ohio  — Retired police officer Kenny Powell worked the streets of Toledo for nearly 25 years before the effects of Parkinson’s on his mobility forced him to retire.

As a result, the retired cop uses a motorized wheelchair.

However, in 2018 someone filed a complaint with the city about the ramp at the officer’s home. Consequently, a court case was opened, WTVG reported.

Friends and family of Powell said the ramp was built to facilitate his movements to and from the home. Unfortunately, it did not meet city regulations, so he had someone take the ramp down.

“I got a call from an officer telling me about a situation involving a retired officer who had issues with a ramp,” said Anita Madison, president of African American Police League. “When I heard the entire story it just made me sick.”

Powell’s family and friends say the 63-year-old is stuck in the house.

“He’s trapped inside his house. He thought in order to be compliant with the city that he had to tear down,” said Madison.

When the president of the African American Police League found out, she took to social media.

“It wasn’t for the purpose of blaming anybody. I want to bring awareness to this because this is a brother of ours, and not just because he’s a brother of ours — he’s a human being in our community. Nobody should have to go through what he’s enduring,” said Madison.

“A complaint was filed in November, 2018 regarding a ramp, and we are duty bound to review residents’ complaints such as that. The last thing we want is for Mr. Powell to be without a needed ramp at his home. It is important to stress that the city neither removed nor paid for the removal of the ramp. We became aware of the removal only recently. The violation notice will of course now be voided.“

Madison’s goal is to get a ramp built for the retired police officer. According to a GoFundme page, they appear to have exceeded their fund raising goal to build a ramp that will comply with city code.