Thomas Webster served New York City as a police officer for 20 years and is a veteran of the U.S. Marine Corps 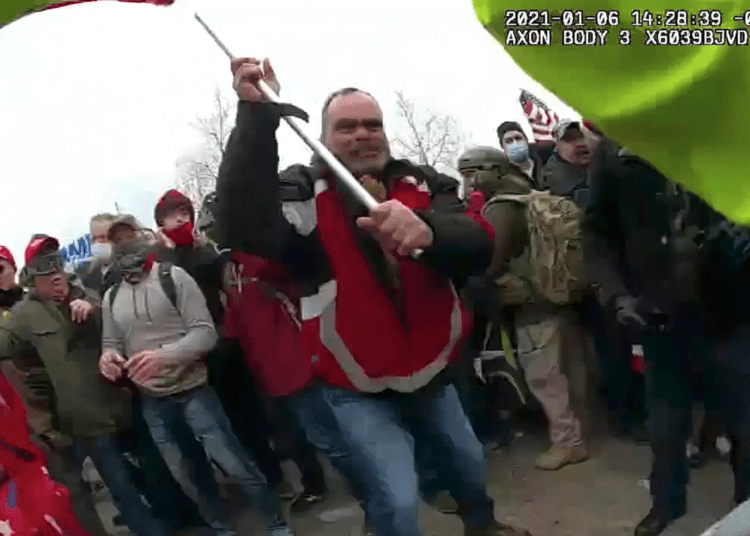 Thomas Webster, in red jacket, struck a D.C. police officer with a flagpole during the Jan. 6 riot. (Metropolitan Police Department)

WASHINGTON, D.C. – A man who served New York City for 20 years as a police officer and was a U.S. Marine prior to that received a 10-year prison sentence for his role in the Jan. 6 riot.

Thomas Webster, 56, of New York, was convicted by a federal jury in May of assaulting a police officer during the riot. The jury rejected his claim that he was acting in self-defense when he struck a District of Columbia police officer with a flagpole, tackled him and grabbed a gas mask the officer was wearing, reported The Wall Street Journal.

Officer Noah Rathbun testified during the trial that he struggled to breathe during the altercation.

Webster, who retired from NYPD in 2011, took the witness stand in his defense and claimed that Rathbun was a “rogue cop” who instigated the confrontation.

U.S. District Judge Amit Mehta said during Webster’s sentencing that his testimony was “not credible” and an “alternative truth.”

“It was your actions—at least on that part of the police line—that opened up the police line that allowed thousands of people through,” Mehta said during an emotional court hearing in Washington on Thursday.

Webster’s 10-year sentence is the longest so far among roughly 250 people who have been punished for actions taken during the riot. He will also have three years of supervised release once he is out of prison, according to the Associated Press.

The judge said he was stunned by Webster’s behavior given his background as a retired NYPD officer as well as a veteran of the U.S. Marine Corps.

“For 25 years Mr. Webster was a public servant in the truest sense of the word,” Mehta said during the hearing. “In 46 seconds, he threw all of that away.”

Webster has already been in custody or home confinement for 18 months prior to his sentencing.

Webster apologized to Rathbun, who was present, but didn’t address the court. Webster said he wishes he had never come to Washington, D.C.

“I wish the horrible events of that day had never happened,” he told the judge.

Mehta allowed Webster to report to prison at a date to be determined instead of immediately ordering him into custody.

During his years at NYPD, Webster was assigned to a uniformed detail that protected both City Hall and Gracie Mansion, a police source said.