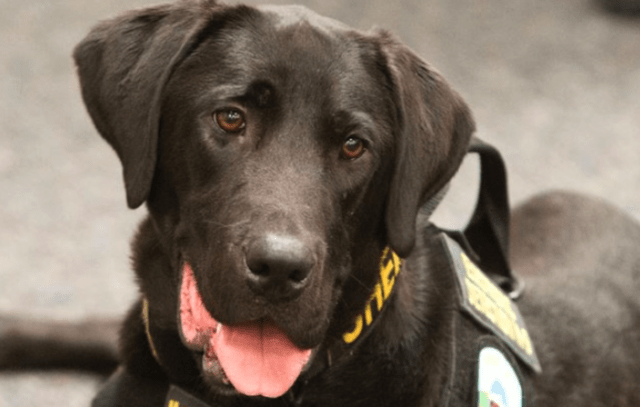 “URL was not bred to be a police dog, and instead had a very rough start as a ‘pound puppy,’ and bounced through two different animal shelters and one foster home within the first few months of his life,” the Weber County Sheriff’s Office posted to Facebook announcing URL’s passing.

K9 URL was a black lab. He retired from the agency in January 2022, resuming life as a “civilian dog” with his handler. He died on Dec. 30, just shy of his 8th birthday, according to the sheriff’s office.

Despite a rough start in life, a rescue center in Indiana recognized the dog’s “unique talents,” which launched him into police training and ultimately into service with the Weber County Sheriff’s Office.

“URL was trained in the infancy of a nationwide program intended to include Electronic Storage Detection in police services. URL was only the fourth dog to be certified as such in the United States,” WCSO noted.

Det. Cameron Hartman was URL’s handler. They were used in more than 2,000 cases, with the K9 often detecting electronic devices that contained child pornography and other evidence during sex abuse investigations.

As a result, URL soon gained the moniker of “porn-sniffing dog,” Fox reported.

In one “remarkable” case, URL detected a USB drive disguised as a key on a keyring, according to the sheriff’s office. In other cases, URL located an SD card that was hidden on an elevated shelf in a Utah home and a cellphone tucked into in a book. He even managed to find a micro-SD card that was secretly stored in a baby jar contained inside a pencil case and hidden in a cedar chest among several other items.

URL’s unique talents propelled him into the national spotlight. He and his handler were flown to Los Angeles in 2017 for an interview with actor Terry Crews and was featured on the show “Cops.”

“So many incredible experiences and opportunities that you brought me as I was just the guy at the boring end of the leash holding on for dear life. Thank you, ‘URL,’ for trusting me, for working so hard, for loving me unconditionally, and for being part of my family,” Hartman wrote in a message included in the sheriff office’s announcement.

“What a privilege it was to serve alongside you. ‘URL’ my heart is broken and still filled with so many memories and emotions. I am so lucky to have been able to get to know you and serve the citizens of Utah and its surrounding states with you,” the handler added as he mourned the K9’s passing.

URL’s cause of death was not disclosed.