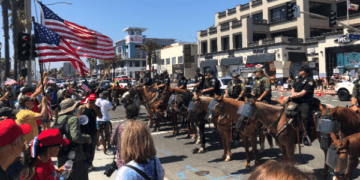 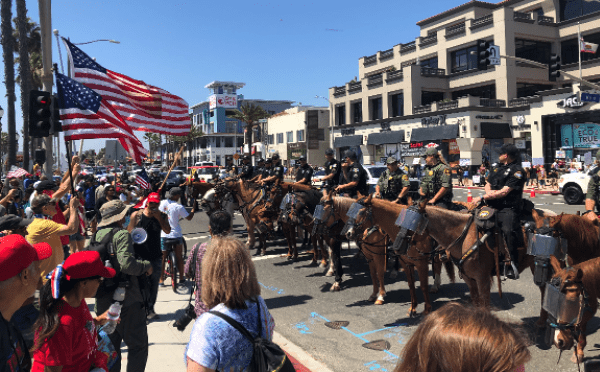 HUNTINGTON BEACH, Calif. – Police in Huntington Beach and other Orange County beach cities had their hands full with protesters waving American flags and hoisting signs bearing portions of the U.S. Constitution on Friday after the beaches were re-closed by the governor on Thursday.

California Gov. Gavin Newsom ordered Orange County beaches to close until further notice, saying it was necessary to protect public health, while allowing other beaches in California to remain open with some restrictions, Law Officer reported.

Thursday’s announcement came days after tens of thousands of people in Orange County packed beaches during a sunny weekend.

During Friday’s protest in Huntington Beach, large crowds were described mostly as well-behaved, but very upset with the governor’s orders.

Part of the protest included a plane flying overhead with a banner that read, “Fire Gruesome Newsome Open California”

One source told Law Officer, the crowd was “very peaceful, very patriotic.” Nevertheless, those voicing their opinion were also very upset with the governor.

Another source who wished to remain anonymous, said, “He likens it (Newsom’s order) to daddy telling us what to do and not in a good way. We’re supposed to be social distancing and look what he created.”

One protester carried a sign that read, “NEWSOM IS NOT ESSENTIAL.”

Orange County Sheriff Don Barnes pushed back against the Newsom-ruled shutdown of Orange County beaches as “wrong,” pinning it as a “failure to recognize the sacrifices three million residents have made to curb the coronavirus spread.”

“The people of this County complied with his directives throughout this pandemic and have taken the measures necessary to ‘flatten the curve,’” he noted. “I implore the Governor to reconsider his actions and work with local authorities, allowing us to address with few without penalizing the majority. No one should fear being subject to a criminal violation merely for seeking out and exercising healthy activities.”

According to sources, many of the protesters were professionals and business people describing the activity as unique, not something they’ve done in the past. “When the Bill of Rights get trampled, it’s time to stand up,” said one individual who did not wish to be named.

Police officers had to deal with some minor issues, but through mid-afternoon on Friday, the crowd seemed to be exercising their First Amendment rights by opposing the governor’s orders without violence or property damage. Furthermore, most vehicles driving by the congested area on Pacific Coast Highway at Main Street near downtown Huntington Beach honked their horns in support.