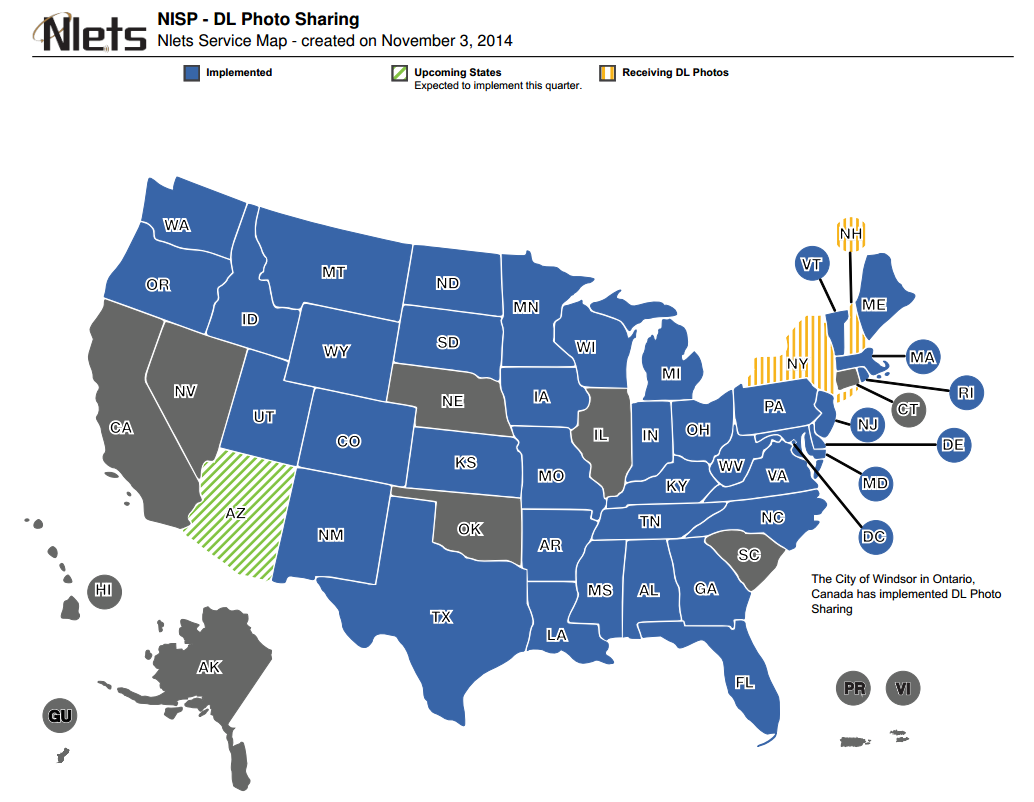 Iowa state trooper Michael Haugen was conducting a roadside inquiry when he noticed something alarming. The man he had pulled over, who claimed not to have his driver’s license, didn’t look like the man who showed up on the screen of his in-car computer. The person in question had given the officer his brother’s information. The officer eventually discovered that the man in question had a suspended license and upon further investigation, the officer found drug paraphernalia and small plastic bag of meth.

Officer Haugen might not have put these pieces together had he not seen the photo with his driver query. Today, most states have access to their residents’ relevant images, but many still don’t have the ability to share with other agencies.

Keeping Pace with Technology
Watch any crime show and you’ll see bleeding edge law enforcement photo technology. In these fictional accounts, officers and investigators have the ability to retrieve, enhance and transmit photos at a moment’s notice.

Reality is less glamorous and more frustrating. Until recently, officers didn’t have access to driver’s license images across state lines—an important tool to verify the identities of potential criminals. Now, the law enforcement community is embracing technology to meet these image demands, and the International Justice and Public Safety Network (Nlets) is on the front lines.

Nlets is a nonprofit organization owned and operated by the states. It was founded 1967 as a method for law enforcement agencies from different states to communicate. Since then, Nlets has remained the primary mechanism for interstate law enforcement communication. This year, Nlets is on pace to process more than 1.5 billion transactions, a growing number of which contain photos.

“It is critical that that we provide law enforcement and public safety officials with the capability to share photos over Nlets,” says Nlets deputy executive director Frank Minice. “Driver’s license and corrections images provide straightforward instant identification and assist with the detection of fraudulent use of driver’s licenses and other false identification.”

With a number of new photo-based initiatives, Nlets, industry partners and agencies across the country are coming together to share relevant photos in the field. Louisiana is the latest state to implement the ability to share driver’s license photos, a move it says will promote safety on the streets.

The ability to view driver’s license photos enables officers to verify that persons in question are who they say they are. Imagine that an officer has pulled over a wanted person. When the officer runs that driver’s license, the corresponding photo should confirm the identity of the wanted person. Without this verification, officers aren’t able to approach dangerous suspects with the necessary caution.

Photo sharing capability requires states to reconfigure their message switches—an expensive job that usually involves third-party providers. Nlets helps states offset these costs through its Brodie Assistance Fund, an endowment that provides financial support to the justice and public safety community. Twelve states and the District of Columbia have received money to cover the cost of photo sharing in the last three years alone.

Despite the obvious benefit, legislation has prohibited some states from adopting photo sharing capabilities. New York, for example, doesn’t share driver’s license photos with other states. Concerns remain over the interpretation of federal statutes that protect the privacy of driver information. New York only recently granted in-state law enforcement access to driver’s license photos, and there are no plans for the state to provide its residents’ photos to outside agencies in the immediate future.

Additional Applications
Currently, 41 states are able to send and receive driver’s license photos across state lines. New York and New Hampshire are able to receive these photos, but they can’t share with the rest of the country. Windsor, Ontario, is the first Canadian city to enable driver’s license photo sharing with the states, but Windsor is also only able to receive images.

Meanwhile, Nlets is also ramping up its efforts for corrections photos. The Nationwide Corrections Images Exchange Over Nlets (NCIEN) initiative aims to provide law enforcement with greater awareness of convicted criminals. It’s logical that law enforcement should have access to the latest corrections photos, but most states do not have sharing capability. NCIEN began as a grant project awarded by the National Institute of Justice. Three states implemented corrections photo sharing as part of the grant requirement, and since then six more have adopted that ability. Unlike driver’s license photos, which are attached to driver response messages, corrections photos are available in a standalone message key. These photos range from mug shots to pictures of scars, marks and tattoos.

Photo sharing is a substantial resource for law enforcement, particularly in cases of missing persons. “They say a picture paints a thousand words and this cannot be truer than in the case of an Amber Alert message for a missing child. An Amber Alert without the child’s picture is nearly worthless in the law enforcement officer’s hands. Add a simple picture and the alert can make all of the difference in the world,” Minice says.

Nlets is doing just that with its Targeted Interstate Photo Sharing (TIPS) initiative. TIPS enables law enforcement agencies to attach pictures to administrative messages, BOLOs and Amber Alerts. Like many of these photos initiatives, it takes a message switch configuration to enable states to share TIPS photos, but Nlets has devised a way for all states to receive these relevant images. The TIPS Photolink service provides a web link that enables access to officers in states that don’t have their message switches configured to share photos. With Photolink, the image is stored in a secure online database for a limited period of time.

“This is a major paradigm shift for law enforcement,” Washington State Patrol Chief John Batiste says. “For the past one hundred years, law enforcement has exchanged interstate BOLOs in text form. Even in this time of innovative technology, most of our officers don’t have the tools to identify people on the street and may be left to guess if someone is telling the truth. This project will enhance public safety in our communities.”

TIPS is a particularly impactful technology because of its scope. Officers across the country send thousands of administrative messages per day. The ability to attach photos provides a new level of precision to open cases and investigations.

To find out more about Nlets or any of these photo initiatives, visit nlets.org.

MIKE ZEHRING is the web and media specialist for Nlets. Reach him at [email protected]