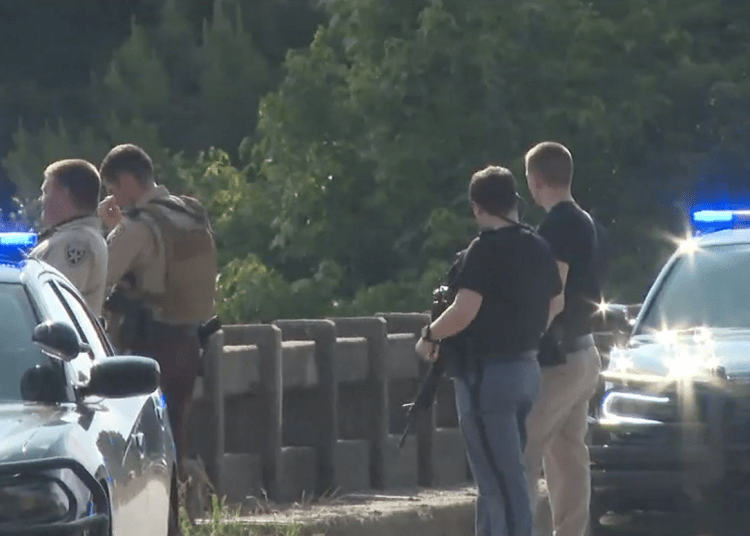 COBB COUNTY, Ga. — A suspect in Georgia who reportedly fired a weapon at an officer at “point-blank” range and fled, has been fatally shot by police when they confronted him after an hourslong search, according to reports.

The sequence of events began when a Cobb County officer responded to a domestic dispute in Acworth Sunday afternoon. During the initial confrontation, the unnamed suspect pulled out a weapon and began firing, 11Alive News reported.

According to Sgt. Wayne Delk, the officer was shot “point-blank” in the chest but was fortunately wearing body armor. He was taken to a local hospital and is expected to recover from the trauma.

“Because of the vest it was not a life-threatening injury, but it would have been a lot worse had he not been wearing a vest,” Delk said.

The suspect fled after the shooting, which led to dozens of officers from multiple law enforcement agencies to respond and assist with the manhunt.

The suspect was shot after a second confrontation with police. (Cobb County Police)

About 7:30 p.m. the department announced the search had ended after a second officer-involved shooting occurred. The department said the suspect had been shot and killed but, in this shooting, no officers were injured, 11Alive reported.

“The search for the suspect has ended,” Cobb County Police said in a tweet. “A second officer involved shooting resulting in the suspect being shot and killed. No officers were injured.”

A person who viewed the law enforcement activity reported seeing several Cobb, Kennesaw, and Acworth police vehicles moving through the area around the time the shooting occurred. According to 11Alive, the location provided by police appears to be located just to the southwest of Allatoona Lake.

Per normal protocol, the Georgia Bureau of Investigation has assumed investigative responsibilities. GBI spokesperson Nelly Miles said she didn’t have any further details on the shooting at the time of publication.