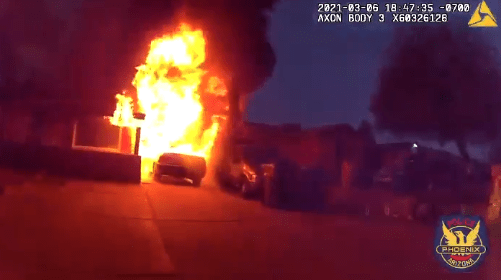 PHOENIX — Police officers are often first on scene of a crisis, including structure fires. As a result, when the situation calls for an emergency response, cops frequently place life-saving efforts in their hands, and they’re rarely recognized in the media for the effort. Therefore, Law Officer would like to salute the heroics of some Arizona police officers who were in the right place at the right time.

In early March, a family home in Phoenix started to burn. Two police officers, who were responding to a call at a nearby apartment complex, spotted the smoke and rushed to help, Western Journal reported.

Ruby Johnson-Smith, 80, the homeowner, was warned by her daughter that the house was on fire.

Not long after, police arrived and burst onto the property, with one officer even breaking down a section of fence to get to the backyard where Johnson’s daughter and four grandchildren had been, according to KPHO-TV/KTVK-TV.

They managed to get the entire family off the property and used a ladder propped up against a wall to get away from the blaze.

“[O]fficers were in the area of 64th Ave & McDowell when they saw smoke coming from a house,” the Phoenix Police Department tweeted last week.

“Officers and neighbors immediately ran to help save a woman and her 4 small children. Thank you community members for helping alongside our officers.”

On (3/9), officers were in the area of 64th Ave & McDowell when they saw smoke coming from a house.
Officers and neighbors immediately ran to help save a woman and her 4 small children. Thank you community members for helping alongside our officers. pic.twitter.com/YJKbJg4TaS

The body camera footage from the rescue has been shared online, with many praising the courageous actions of the involved officers.

At one point, when the family is seated after being safely rescued, they’re crying and the officer reassures them, saying, “We’re going to take care of it, OK? They’re all OK, that’s all that matters.”

Firefighters arrived and were able to extinguish the blaze, but according to their Facebook post, they encountered “heavy fire conditions.”

Later, neighbors recalled the incident and how stressful it was — especially because at some points, the fire threatened to jump to nearby houses as well.

“She kept saying that her kids were in the backyard, and I thought they were by themselves. I was like, ‘Oh my God … we need to get those kids out of there,’” neighbor Josie Aragon told KSAZ.

“He saved the family,” neighbor Annette Castillo said of the police officer who risked to get the family out.

According to Johnson-Smith, the two police officers are heroes. Moreover, she believes there will be a heavenly reward for them.

The heroic officers were not publicly identified. Nevertheless, their actions are worthy of praise.