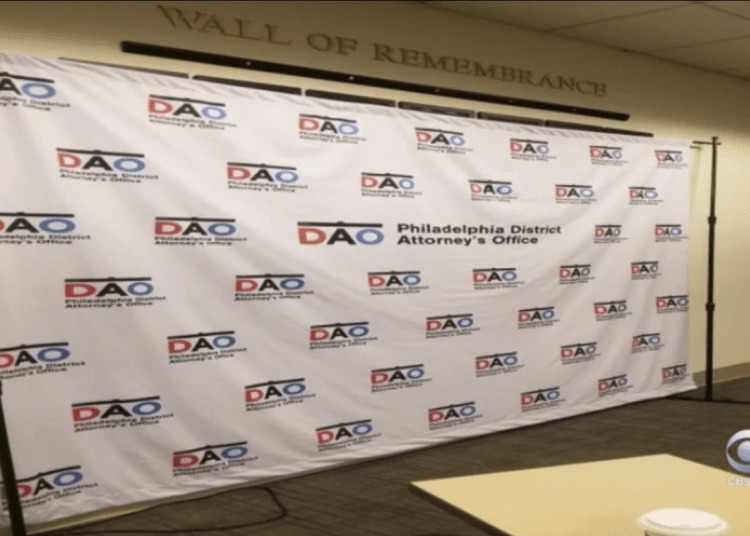 A police Wall of Remembrance is covered up at the Philadelphia DA's Office. (CBS Philadelphia) This is how the wall is supposed to look. But a Philadelphia Police union spokesperson posted the photo of the wall online last week.

In response, the district attorney’s​ spokesperson, Jane Roh, tweeted, in part: “We are legally required to cover the Wall of Remembrance when this room is used for certain purposes. We follow the law.”

Mike, you well know that the emergency of the pandemic has required different spaces in this city to be used for specialized purposes. We are legally required to cover the Wall of Remembrance when this room is used for certain purposes. *We* follow the law. https://t.co/CjMqucUJat

Some believe it’s because the room had held a grand jury, which is supposed to be private, CBS reported.

“He’s citing a law. He’s hiding behind the grand jury stuff, I understand that. But you don’t cover that. If that is the case, you do it somewhere else,” McNesby said.

Roh then tweeted the word “unlike” with links to news stories about Philly police officers facing charges.

City Councilmember David Oh wants answers. He sent the district attorney’s office a letter, reading, in part: “Please provide, in writing, which law, would be broken by leaving the memorial uncovered.”

“I find it unacceptable that is not being answered,” Oh said.

At an unrelated news conference Monday, Krasner reiterated his spokesperson’s tweet, saying he could not legally explain why the wall was covered, CBS reported.

“I have to make sure that my answers do not violate the law, that they are not immoral, that they do not endanger,” Krasner said.

“Do you regret the wall being covered?” CBS3’s Matt Petrillo asked.

“I do not regret doing what is legally required,” Krasner said.

“Do you regret the wall being covered?” Petrillo asked again.

“I do not regret doing what is legally required,” Krasner replied. “I do think it’s unfortunate that there are some people who see the Wall of Remembrance as a political tool.”

The fallen officers’ wall was dedicated back in 2009 when Lynne Abraham was district attorney. Today, she told Eyewitness News the covering of the wall shows Krasner doesn’t care about victims or police.

Krasner is one of several George Soros funded prosecutors around the country who continue to make negative headlines due to policies and practices that are anti-law and order.

Chesa Boudin, the left-wing district attorney of San Francisco, celebrated online after his father, who is a convicted murderer serving a life sentence in prison in New York, got his first dose of the COVID-19 vaccine before law abiding citizens received the opportunity to get vaccinated.