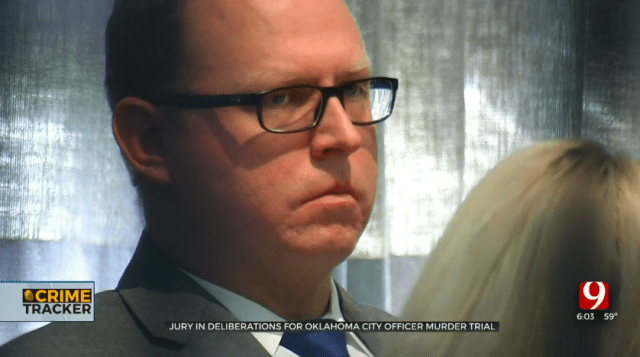 OKLAHOMA CITY – A jury found an Oklahoma City police sergeant guilty of second-degree murder and recommended a 10-year sentence with no fine Monday.

During trial, prosecutors played portions of a 911 call from Nov. 15, 2017, and they showed bodycam video (included below).

Yet the last words jurors heard were from District Attorney David Prater, was asking them to return a guilty verdict to punish Sweeney and promote public safety. Pigeon’s mother was overwhelmed with emotion as she heard the gunshots that ended her son’s life, and she left the courtroom in tears.

Prater told the jury that everyone at the scene was placed in a horrible situation because Sweeney ignored his training.

“The last thing they (Police) should want to do is murder a citizen they’re sworn to protect,” he said.

It’s been almost two years since police were called to the 1400 block of SW 20th Street to approach a suicidal person, Dustin Pigeon.

Pigeon reportedly doused himself with lighter fluid, held a lighter and threatened to kill himself. As a result, Pigeon was shot and killed when he refused to comply with officers’ commands.

However, the district attorney’s office eventually determined that deadly force was unjustified.

According to the court document, Sweeney shot Pigeon multiple times after Pigeon was hit by bean bag projectiles launched by another officer. Pigeon was pronounced dead at the scene.

The court document said the investigation into the incident concluded Pigeon was not armed and was not a threat to the officers when he was shot by Sweeney. Prosecutors reiterated Monday that the other officers both testified that Pigeon never made threats and made no advances toward officers, according to the news agency.

Before the prosecution closed, Sweeney’s attorney Gary James thanked the jury for their service and reminded them of the difficulty, emotions and facts of the case. James called it an emotional case because “officers are an element of society that society has seemed to turn its back on.”

James told the jury that Sweeney reacted to Pigeon the way he was supposed to react. Sweeney thought Pigeon was holding a knife and thought the other two officers and himself were in danger, James said.

A formal sentencing date has not been released at this time.