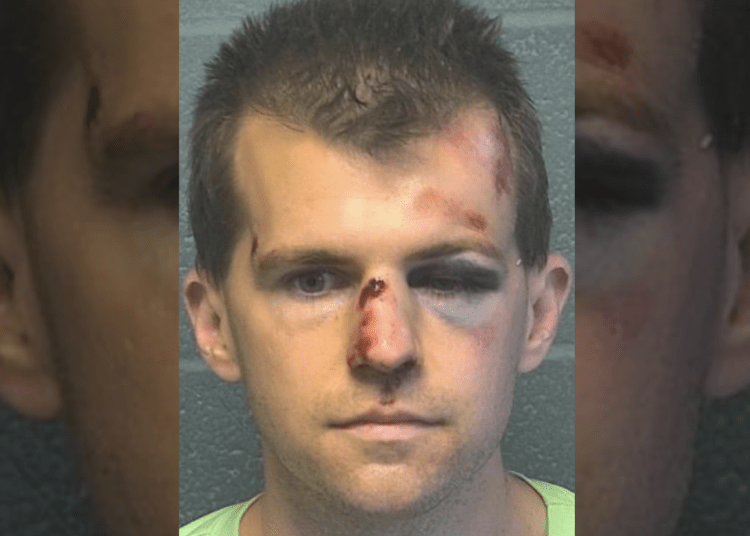 OKLAHOMA CITY, Okla. — An Oklahoma City father tackled a man who was seen fondling his son at a bus stop, leaving the suspect with a cracked skull and a bloody booking photo.

Michael Coghill was arrested Wednesday by the Oklahoma City Police Department after he was video recorded inappropriately touching a nine-year-old boy at a bus stop. The fondling led to a confrontation with the boy’s father, according to News9.

OKCPD could not confirm to Fox News that the boy’s father was the one to confront the suspect due to the Open Records Act.

According to the young victim — per a police report obtained by Fox — Coghill would often jog near the bus stop and had stopped by the area on more than one occasion. On Monday, the boy said Coghill touched him in a way that made him uncomfortable. So the youngster confided in his parents as to what occurred.

After the Monday incident, the father accompanied the boy to the bus stop on Wednesday, according to local reports.

“He knew the time he would be there every day,” Ward told News9 of Coghill. “That was the hardest part, the most disgusting part.”

The victim’s father remained in his vehicle waiting to see if the man would make an appearance and do something inappropriate. As the boy made his way to the stop, Coghill arrived, halted his jog, and approached the boy, according to the police report.

“While he was watching the school bus stop, our suspect ran by him, ran past the bus stop where the children were waiting. Turned around, came back and stopped where he touched the child,” Sgt. Dillon Quirk with the Oklahoma City Police Department disclosed.

Coghill was seen placing his hand on the child’s side and then moved it to fondle the backside of the boy. The father recorded the incident before running and tackling the perpetrator. When police arrived, the suspect had visible injuries to his head and face, News9 reported.

“He was in the cop car all bloody,” Ward added.

The video recording was subsequently provided to law enforcement authorities as evidence of the crime.

As a result of being “taken into custody,” Coghill’s skull was fractured and his orbital socket cracked on the left side of his face.

Local residents said that Coghill is a pastor at Lakehoma Church of Christ. The church issued a statement condemning the abuse.

“We were heartbroken to learn of the incident involving one of our adult ministers, and our hearts go out to the child and family involved. We were shocked at this news as he had a clean background check, and we have received no reports or claims against him during his tenure. Church leadership has no tolerance for any type of abuse and is meeting tonight to discuss next steps. We will cooperate with authorities as needed,” the statement said, according to News9.

Coghill was booked at the Oklahoma County Detention Center on one count of lewd acts to a child.