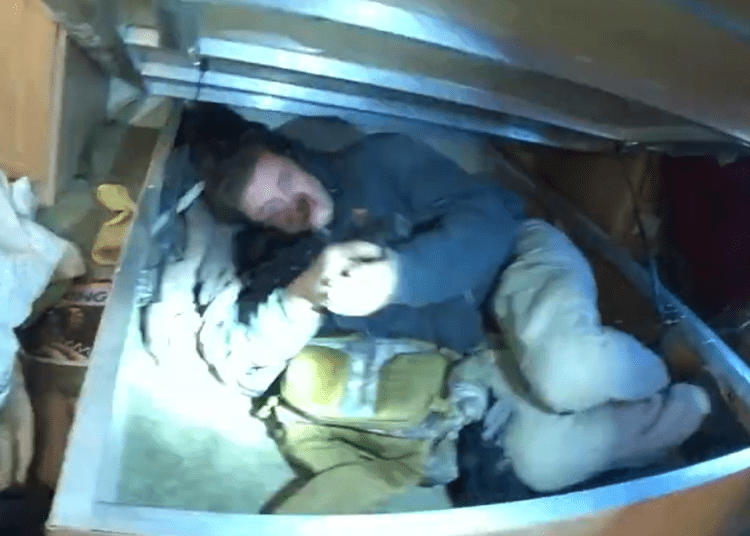 A suspect hid beneath a mattress in a travel trailer and opened fire on police when they found him. (Oklahoma City Police Department)

OKLAHOMA CITY – Stunning bodycam video shows the moment officers in Oklahoma were ambushed by a fugitive who was hiding beneath a mattress inside a travel trailer. A gun battle ensued and the suspect is dead. No officers were struck by gunfire, but one suffered facial injuries due to flying debris.

The situation unfolded Nov. 15 about 10:25 a.m. when the Oklahoma City Police Department was notified that a man with an out-of-state felony warrant (no further details) was in a travel trailer at 14000 Iron Rd. The wanted suspect was identified at Timothy Johnson. Police learned that he had been seen entering the trailer, and was still present upon officers arrival, Breaking 911 reported.

While searching the trailer with consent, officers lifted a mattress that covered a storage area. When doing so, they discovered Johnson who opened fire with a handgun. A gun battle ensued as the officers retreated and sought cover.

The OKCPD Tactical Unit was activated and responded to the scene. Attempts to communicate with Johnson were met with negative results and the Tactical Unit ultimately made entry into the trailer where they discovered he was dead, according to the news outlet.

Although no officers were struck by gunfire, one suffered facial injuries due to flying debris during the firefight. The officer was treated at a local hospital and subsequently released.