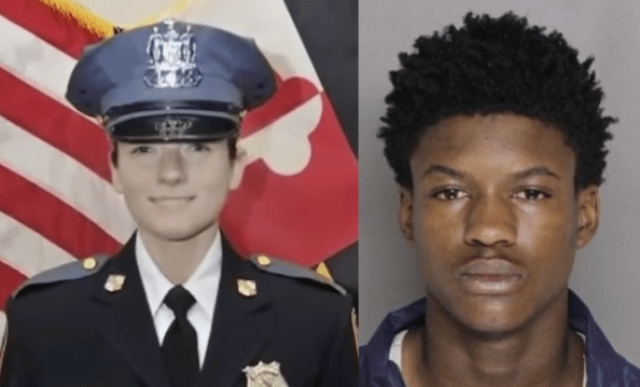 Although he was 16 when the murder occurred, Harris was charged as an adult.

As the verdict was read, he slumped in his seat in the packed courtroom and began sobbing while his guilt was announced, reported The Baltimore Sun.

The jury began deliberations on Tuesday afternoon and rendered their verdict on Wednesday morning.

As a result, Harris is facing life in prison. He is scheduled to be sentenced on July 23, according to The Sun.

“My heartfelt condolences and prayers remain with Officer Amy Caprio’s family. The past couple of weeks have undoubtedly been difficult for Amy’s family, friends, and co-workers at the Baltimore County Police Department,” Baltimore County Executive Johnny Olszewski said in a statement. “I thank the jurors who listened to the testimony, examined the evidence and rendered their verdict. While this does not bring back Officer Caprio, justice has been delivered.”

The incident that led to Officer Caprio’s murder began when she stumbled upon a burglary in progress at approximately 2 p.m. on May 21, 2018, while she was investigating a report of a suspicious vehicle, WJZ reported.

According to Fox 5 DC, police later discovered damage to a patio door at one residence in the area.

Court documents said that Harris admitted to investigators that he was driving a Jeep Wrangler, and that he was waiting in the vehicle while his three accomplices were committing a residential burglary.

When Officer Caprio arrived in the area, Harris said he attempted to flee, but ended up in a cul-de-sac.

Consequently, Officer Caprio pursued him, then exited her patrol vehicle and demanded that Harris get out of the Jeep, court documents said.

However, Harris said he opened the driver’s door partway, but that he closed the door again, and “drove at the officer,” the report read.

Tony Kurek said that his adult son was outside in the yard and witnessed the officer confronting the occupants inside a Jeep with her weapon drawn, the Associated Press reported.

Another neighbor, Dahle Amendt, said he was inside his home when heard the officer issuing commands to someone outside.

Kurek said that his son heard the same sound.

“The next thing he heard was a pop, and he saw the Jeep take off and run right over her,” he recounted.

“She basically landed almost in front of my mailbox,” Kurek told The Baltimore Sun.

The Jeep fled the scene, leaving skid marks on the street next to the dying officer.

Kurek called 911, as his other son began performing CPR on the fallen officer, he said.

“I had a very, very bad feeling that she was going or gone,” Kurek recalled. “She was young. It just breaks your heart.”

Officer Caprio, 29, who had been on the police force for almost four years, was bleeding profusely when she was rushed to a nearby hospital.

She was pronounced dead at 2:50 p.m., less than an hour after she tried to stop Harris, WJZ reported.

GUITLY: Jury found 17yo Dawnta Harris guilty of Linwen Way burglary and first degree felony murder in the death of Officer Amy Caprio. Jury deliberated for 2 hours this morning and 4.5 hours yesterday before reaching a verdict. He faces life in prison. @WMAR2News pic.twitter.com/3BN2x6vAiX

In the beginning phase of the investigation, Harris’ attorneys called on the state’s attorney’s office to release the fallen officer’s bodycam footage (shown below).

“This was not an intentional killing. It was not deliberate. It was not premeditated. This was an accident. And that’s how we feel about it,” Gordon said.

“He drove away from danger… they make it sound like he drove at her,” Brown complained.

Nevertheless, Officer Caprio’s bodycam footage painted a very different picture from what her killer’s attorneys have tried to tell the public.

Jurors were shown the bodycam video of her murder on Friday, and that long-awaited footage was also released to the public, WJZ reported.

The video showed Officer Caprio stood in front of a black Jeep Wrangler that prosecutors said was driven by the then-16-year-old Harris with her weapon drawn.

“Stop, stop!” Officer Caprio yelled at the driver of the Jeep. “Get out of the car!”

She repeatedly ordered Harris to get out of the car, the video showed.

The video showed Harris stopped his vehicle and opened the driver’s door of the Jeep briefly as if to comply with the officer’s order.

But then he shut it again, and accelerated, driving directly at Officer Caprio.

Officer Caprio fired one shot as the Jeep ran her over and drove off, leaving her for dead, WJZ reported.

The portion of the video that included hearing the officer dying was not released by the media due to its graphic nature; however, the video in its entirety was shown to the jury.