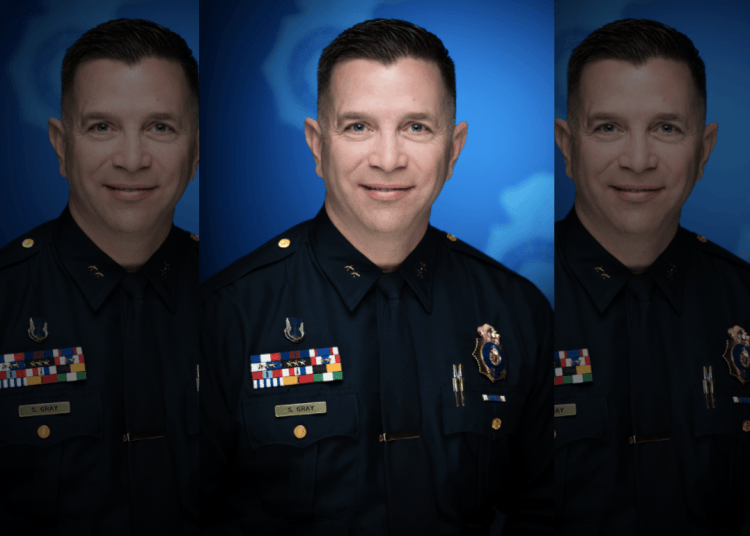 OMAHA, Neb. — An off-duty deputy chief and and another citizen (later identified as a second off-duty officer) are being hailed as heroes after taking down a grocery store gunman Tuesday evening.

The first call for assistance to the southwest Omaha Hy-Vee came around 6:30 p.m. Initial reports indicated one person was injured.

A law enforcement source told KETV NewsWatch 7 that a subject was injured while being arrested inside the store.

The Douglas County Sheriff’s Office told KETV that a person came in and started shooting in the pharmacy area of the store. Initial reports indicated two off-duty Omaha police officers were in the area and were able to handcuff and arrest him, according to the sheriff’s office. However, only one OPD officer was later identified.

Omaha Police Wednesday said the man who fired shots outside and inside Hy-Vee was Jacob Muhle, age 21, KETV reported.

Muhle was tackled by off-duty Deputy Chief Scott Gray and another customer inside the Hy-Vee near 180th and Q streets shortly before 7:00 p.m., according to KETV. It is unknown if the “customer” was initially reported as a second off-duty officer.

(Editor’s note: After this article was published, a police source told Law Officer that Deputy Chief Gray was joined in the take down by a second off-duty individual. Officer Dave Staskiewicz should also be recognized for heroic actions. Thanks to both!)

Muhle is accused of shooting two vehicles in the pharmacy drive-thru, then walking into the store and shooting a front window as well as a monitor.

Investigators say several people ran out of the store when they heard the gunfire.

Off-duty Deputy Chief Gray was inside the store at the time and ran toward the gunman. He and another customer (Officer Dave Staskiewicz) ended up tackling the suspect and disarmed him.

Furthermore, Gray was able to take him into custody.

Muhle is facing several charges including assault, terroristic threats, firing a gun at a building or vehicle, and five counts of use of a gun by a felon. The gunman had minor injuries and was taken to a hospital for treatment.

One woman also suffered minor injuries running out of the store. Fortunately, no one was injured by gunfire.

“Most important thing is no one was seriously injured. Only minor injuries. We are really fortunate this situation didn’t turn out worse,” OPD Deputy Chief Ken Kanger said.

Police are investigating a possible motive. They believe the suspect was in the Hy-Vee parking lot for at least 30 minutes prior to the shooting.

Hy-Vee employees James Baltes and Cody Kerfoot were inside the store when the gunfire began.

“I just heard my manager screaming, ‘Someone has a gun!’ And then I heard a loud bang,” said Kerfoot.

Kerfoot ran out of the store through the loading dock. Baltes hid in the meat cooler with others, waiting for the coast to clear.

“No one was really saying anything. People just kind of got behind boxes and what they could get behind,” Baltes said.

Once everything was clear, Baltes called his parents to let them know he was OK.

“I called them the minute I was outside and just told them: ‘You’re going to see something on TV probably. You’re going to hear about it pretty soon.’ I just wanted to let them know that I was OK and nothing was wrong,” Baltes said.

Customer Jason Green and his wife were checking out when he said he saw the man and what police are saying was a semi-automatic handgun, WOWT reported.

”He spun around, and it didn’t look like he was targeting anybody,” Green said. “He didn’t have it positioned at anybody. He just had it at his side and was walking in.”

The customer said he saw the shooter — “black revolver, guy had black hair and was wearing black jacket” — but didn’t realize it right away.

”I didn’t think he was the shooter until I saw the gun in his hand and then my fight or flight kicked in and I ran, I was 40 feet from him,” Green said. “I was 40 feet from him, and there wasn’t anybody in between the two of us. There was nothing I could have done, knowing he was shooting.”

Green said his wife ducked down then ran out.

”She crouched in one of the aisles,” he said. “She took off, and when I looked back at him, I ran again, tried to find her, and I did find her.”

Customers sheltered in place for about five minutes until they received an “all-clear.”

UPDATE: Initial reports did not clarify the off-duty officers involved in this situation. Omaha Police Department posted the following information that will help clarify what occurred.