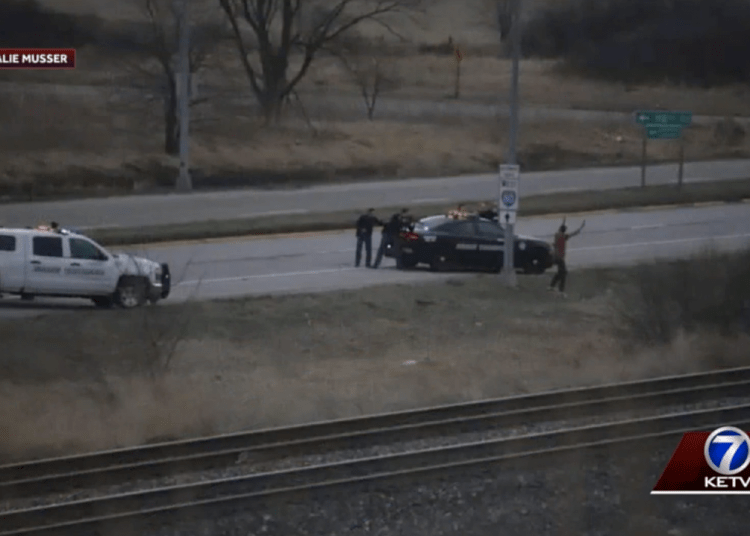 A gunman accused of shooting an Omaha police officer was taken into custody after a vehicle pursuit. (Screenshot KETV)

OMAHA, Neb. — A Nebraska police officer was wounded in a mall shooting and the suspect is in custody after a vehicle pursuit led to the gunman’s capture, according to reports.

The shooting occurred at Westroads Mall. An Omaha Police Department spokeswoman confirmed Friday evening that authorities have the suspect in custody following a high-speed chase that ended some distance away near the small town of Waverly.

OPD spokeswoman Sherie Thomas said the officer was alert and will undergo surgery. The wounded officer was responding to a shoplifting incident at JCPenney when he was targeted. Following the gunfire he was taken to Nebraska Medicine in critical condition.

Prayers for blue. #OPD via @OPDSgtShade

OPD officials said the incident began with the report of a shoplifting crime.

Officers responded to a “help an officer” call around 4 p.m. Friday. OPD Chief Todd Schmaderer said in an update about an hour later outside the mall that several shots were fired after a struggle, and the suspect was at-large. OPD then set up a perimeter around the area, and Able 1 was circling the mall.

Officials told local news organizations the NSP pursuit headed west past Waverly, reaching speeds of more than 140mph. At 5:42 p.m. the suspect was taken into custody without incident on Highway 6, Thomas said. Moreover, a firearm was recovered at that scene, WOWT reported.

The incident left shoppers inside shocked and confused. One witness who said he was shopping inside the mall when the shooting occurred said stores began hurriedly slamming their security shutters.

Tonight, an Omaha Police officer needs the prayers and support of the community he serves. I ask everyone to join me and…

Witnesses told KETV NewsWatch 7 it was a frightening situation.

“So then all of us were just kind of freaking out,” Ashley Heisler said. “Our hands were shaking.”

Ashley Heisler and her older sister Kaitlyn Heisler were inside the mall when the shots were fired.

“We were inside of Claire’s, and next thing, we’re getting ready to leave, and next thing I know, we see a bunch of people getting pushed into the store,” Kaitlyn Heisler said.

In December 2007, another part of Westroads Mall was the scene of a mass shooting when eight shoppers and Von Maur staff were killed in the store, and several others were injured, some of them critically, needing extensive surgery and rehabilitation.

Four shots were fired at Officer Jeffrey Wittstruck hitting his face and the top of his head, KSNB reported. The officer was taken to Nebraska Medical Center in critical condition but he is stable and recovering.

Kenya Lamont Jenkins Jr., 21, was booked to Douglas County on charges of 1st-degree attempted murder and use of weapon to commit a felony. 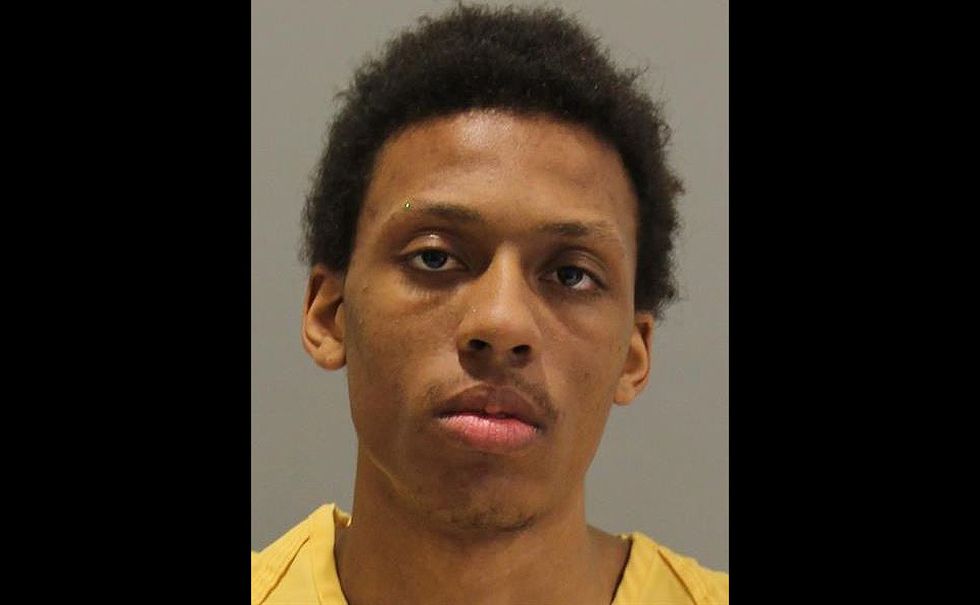 Officer Wittstruck and Officer Joseph Kunza went to the JC Penney’s store in Westroads Mall at 3:27 p.m. for a man accused of shoplifting and was being detained by store security. A JC Penny’s loss prevention employee told officers Jenkins put a package of t-shirts in his backpack and left the store without paying.

Initially, Jenkins gave a fake name to the officers and they say he wasn’t being cooperative when asked to remove his backpack. When asked Jenkins stood up and placed his right hand in his sweatshirt pocket.

The officer fell to the ground and Jenkins ran out of the security office. Officer Wittstruck’s body camera recorded the entire incident and the mall’s security cameras caught Jenkins leaving and driving away in a white BMW S30i.

The Nebraska State Patrol found the BMW near the Pump and Pantry gas station by the Gretna 432 exit at 5:22 p.m. There was a traffic stop due to the car speeding about 140 miles per hour driving towards I-80 west.

The BMW got stuck on railroad tracks after troopers put stop sticks near the Waverly intersection on I-80. Jenkins got out of the car and onto Highway 6 after the car got stuck, KSNB reported.

Jenkins was taken into custody and troopers found a Taurus .380 handgun. He was taken to the Omaha Police Headquarters and complained of a minor leg injury.

The Omaha Fire Medics were called and assisted in Jenkins’ injuries but he wasn’t taken to the hospital.

Officer Wittstruck has been with the Omaha Police since September 2016.