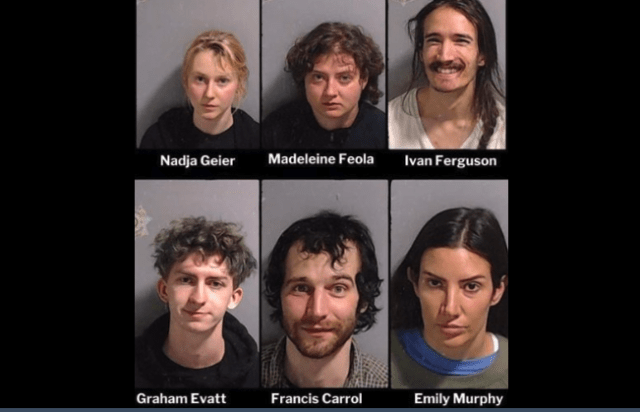 Police arrested six people during the night of chaos. After law enforcement authorities identified the individuals taken into custody, it’s noteworthy that not a single person who was arrested resides in the city of Atlanta, and only one of the six criminal defendants even lives in the state of Georgia.

“It doesn’t take a rocket scientist or an attorney to tell you that breaking windows or setting fires is not protesting, that is terrorism,” Atlanta Police Chief Darin Schierbaum said during a press conference over the weekend. “They will be charged accordingly, and they will find that this police department and the partnership is equally committed to stopping that activity.”

According to the Western Journal reported,  they have been charged with the following crimes:

“What I saw wasn’t peaceful,” a witness, David Abrohams told FOX 5, “Yeah, no, I mean blowing up cop cars and throwing fireworks at police officers is not peaceful.”

The call for violence came after a Georgia State Patrol trooper was shot in the abdomen last Wednesday morning. Police returned fire and the suspect was killed. The trooper had to undergo surgery and is in stable condition, according to the Georgia Bureau of Investigation.

The OIS occurred as law enforcement authorities tried to clear an encampment near the site where a new $90 million Atlanta Police Department (APD) training facility will be constructed, Law Officer reported.

The site of the planned training center has been the focal point of protests for months by Antifa who have referred to the location – which protesters previously made an autonomous zone – as “Cop City.”

The sweep was conducted as “an operation to identify people who are trespassing and committing other crimes on the property,” GBI said.

“At about 9:00 a.m. today, as law enforcement was moving through the property, officers located a man inside a tent in the woods. Officers gave verbal commands to the man who did not comply and shot a Georgia State Patrol Trooper,” GBI said in a statement. “Other law enforcement officers returned fire, hitting the man.”

“Law enforcement evacuated the Trooper to a safe area. The man died on scene,” it added.

The bureau continued: “The injured Georgia State Patrol Trooper was taken to a local hospital where he underwent surgery. A handgun and shell casings were located at the scene. The GBI is working the officer-involved shooting and the investigation is still active and ongoing.”

GBI Director Michael Register confirmed during a press conference that the shooting was in self-defense after the suspect who died in the shooting opened fire “without warning” on the trooper, Fox News reported.

“An individual, without warning, shot a Georgia State Patrol trooper,” Register told reporters. “Other law enforcement personnel returned fire in self-defense and evacuated the trooper to a safe area. The individual who fired upon law enforcement and shot the trooper was killed in the exchange of gunfire.”

The deceased man who initiated the gun battle with police was identified as 26-year-old Manuel Esteban Paez Teran, Law Officer reported. He was described by the Star Observer as “a Queer environmental activist.” His home base is unclear, but his mother resides in Panama and he’s been described as a “Tallahassee activist.” He also attended Florida State University’s Panama Campus from 2016 to 2019, then attended school in Tallahassee from January 2020 to April 2021, WCTV reported. Hence, he also did not appear to be a resident of Atlanta.

In December, five members of Antifa were arrested on domestic terrorism charges after they were protesting outside of the planned APD training center. Police identified them as Francis Carroll, 22, of Maine, Nicholas Olson, 25, of Nebraska, Serena Hertel, 25, of California, Leonardo Vioselle, 20, of Georgia, and Arieon Robinson, 22, of Wisconsin, Law Officer reported.

As noted, all but one lived outside of Georgia. Many of those who were arrested were holed up in treehouses where police later recovered explosives.

Importing chaos has been the calling card of radicals in recent years. This bodes the ongoing questions about out-of-state rioters who have been caravanning from one hot spot to another. How are they funded and who is benefiting from the anarchy they are causing?