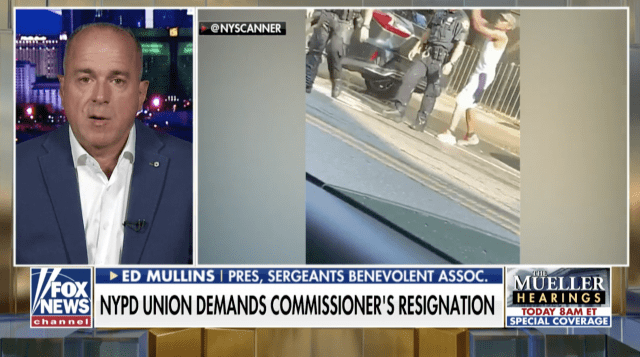 NEW YORK – The president of the Sergeants Benevolent Association said Wednesday that New York Police Department Commissioner James O’Neal should be blamed for public attacks on police and should resign due to his “failed policies.”

“I’m putting the blame on O’Neal as I have in the past, the NYPD is pretty much being run into the ground,” Ed Mullins told “Fox & Friends First.”

He said much of what is happening–police inaction–on the streets of New York is the “Pantaleo Effect.” NYPD Officer Daniel Pantaleo was vilified following the death of Eric Garner, yet the justice department recently said he would not be prosecuted based upon their investigation.

“I’m putting the blame on O’Neal as I have in the past, the NYPD is pretty much being run into the ground.”

Two videos of officers being pelted with objects and drenched with buckets of water surfaced on social media on Monday.

“We have mixed messages that are coming from the police commissioner and what we’re seeing now is an effect on the cops in the street who are hesitant to get involved, specifically on minor crimes,” said Mullins.

In one video, somebody hurled a bucket that hit an officer in the head while he was making an arrest in Harlem. Others joined in to splash the officers with water. NYPD officials called the videos “reprehensible” and now seek the men involved in the assaults.

Mullins said officers were hesitant to take action because he speculated that they wanted to avoid an individual getting hurt or killed in the process. In yet another video, two officers are seen on the subway being taunted by a man, Fox News reported.

The New York City Police Benevolent Association wrote on Twitter Tuesday that the incidents are not isolated.

**WARNING: GRAPHIC LANGUAGE**
For anybody who thinks yesterday's videos were isolated incidents: NYC POs are confronting this kind of abuse, or worse, on a daily basis. We're past the point of "disrespect." This behavior is inciting lawlessness, putting cops & NYers in danger. pic.twitter.com/hHKJtlvpm5

“We have a video going around now of officers verbally being abused on a subway train. That’s disorderly conduct, that’s an arrestable offense, and this is becoming an epidemic in the NYPD. But this stems from failed policies,” Mullins said.

He added that Police Commissioner O’Neal has not yet come to the police officers’ defense.

“He hasn’t defended any of the officers involved in the NYPD since he’s been commissioner and he doesn’t have the backing of the mayor. The rank and file have lost confidence in him.”