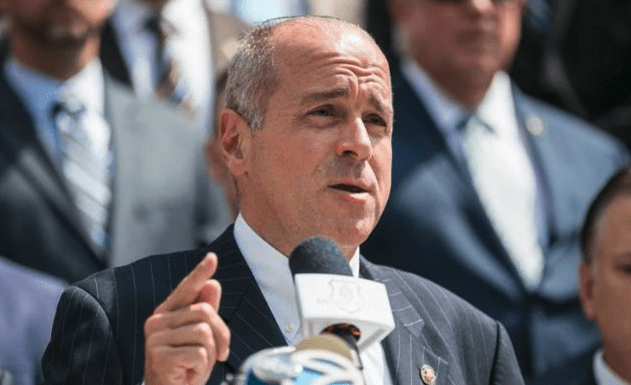 NEW YORK — The animated leader of the NYPD’s Sergeants Benevolent Association, Ed Mullins, resigned his position after the FBI raided his home and office on Tuesday.

Federal agents searched the headquarters of the New York City police sergeants’ union and Mullins’ home as part of an investigation into misappropriation of union funds. The FBI seized computer equipment and boxes of documents, according to sources, the New York Post reported.

His resignation was announced in an email to union members Tuesday night, hours after the FBI raid.

“Given the severity of this matter and the uncertainty of its outcome, the SBA Executive Board has requested that President Mullins resign from his position as SBA President,” the email said.

US Rep. Ritchie Torres (D-NY), a former city councilman whom Mullins referred to as “a first class whore” on social media, said the union boss’ departure was “long overdue.”

“Ed Mullins has spent his career abusing power and trafficking in hate, and his misdeeds have finally sent him into retirement, which is exactly where he belongs,” Torres said in a statement.

A NYC police officer with more than two decades on the job said Mullins held his position too long, according to the Post.

“He’s brash and I thought he was reckless,” the officer said. “He got bigger than the department. Once he did that to Richie Torres, I thought he crossed the line. The FBI must really have something serious.”

Mullins became an NYPD officer in 1982, and was promoted to sergeant in 1993. He was elected president of the SBA 2002. The union represents about 13,000 active and retired sergeants in the NYPD and controls a $264 million retirement fund, the Post reported.

One Bronx officer said Mullins had forgotten he was speaking for other cops as leader of the union.

“Unfortunately he forgot about that and the vomit that comes out of his thumbs on Twitter got the best of him,” the anonymous officer told the Post. “He could always talk the talk but not walk the walk.  He put his opinions before the union and before our best interests that matters.”

Mayor Bill de Blasio didn’t hold back on his condemnation of the union boss.

“Ed Mullins dishonored his uniform, his city and his union more times than I can count,” the mayor said. “It was just a matter of time before his endless hatred would catch up with him. That day has come.”