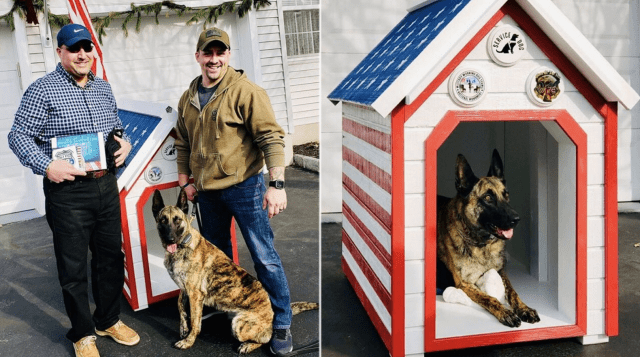 HACKETTSTOWN, N.J. – A New Jersey police service dog has a new patriotic doghouse compliments of a local woodworker who built it.

Lou Dibella donated the special red, white and blue doghouse to K9 Jada, a member of the Hackettstown Police Department, and her handler, Officer Christopher Laver.

“K9 Jada received her new home on Thursday and she is very excited,” the HPD wrote on its Facebook page.

Dibella wanted to donate the doghouse to a local K9 handler who was also a military veteran, the Lehigh Valley Express-Times reported.

As a result, Laver qualified. He served during the Iraq War with the U.S. Army 10th Mountain Division’s 57th Gun-Truck Company.

“My passion for K9 started during my deployment as I worked with and observed military explosive detection dogs,” Laver said, according to the news agency. “That’s when I learned about the Malinois breed. I had no formal K9 training until… I purchased Jada as a puppy. From that point on, I would work with K9 handlers and civilian K9 teams to learn and observe.”