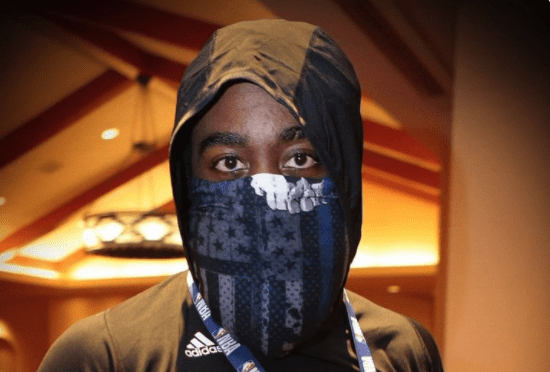 Houston Rockets’ star James Harden was back in the bubble for less than a day before a post shared by the team of the NBA scoring leader wearing a “Thin Blue Line” mask received major backlash.

Harden didn’t travel with the rest of his team to Orlando last week following speculation that he had contracted COVID-19, along with teammate Russell Westbrook, who confirmed himself on social media early this week that he tested positive.

But on Thursday the Rockets shared a picture confirming that Harden was back.

Instead of hyping fans up about his arrival, the post was met with heavy criticism after it showed Harden wearing a mask depicting a popular pro-police symbol.

“For the love of GOD tell me James Harden isn’t wearing a mask called ‘the blue patriot,’” one user said on Twitter.

The two-time scoring champion denied trying to draw attention to himself, ESPN reported.

“Honestly, I wasn’t trying to make a political statement,” Harden said before the Rockets’ practice Friday. “I honestly wore it just because it covered my whole face and my beard. It’s pretty simple.”

When the NBA returns to play, they’ve authorized a list of social justice messages to be worn on players’ uniforms. Absent from the approved list is anything supportive of law enforcement or critical of China, Law Officer reported. Thus far, an overwhelming majority of players have selected a message that will replace their last name on the team uniform.

Singer Trey Songz was among the critics of Hardin who shared the picture on his social media with the caption “This certified clown s***. I’ll say it for everybody who scared to. FOH”

Rapper Young Thug, a friend of Harden’s, also wrote on Twitter: “he don’t have internet so he obviously don’t know what’s right or wrong if he posted something that’s against US.”

Harden has not been known to be outspoken about political matters but on Thursday he told reporters that he believed that the protests that followed the death of George Floyd represented a “powerful” message, FOX reported.

“The way the city just like rallied, it was amazing. I think the world saw it,” he said. “The march and everything that we’re standing for is very powerful.”

James Harden was asked about George Floyd and being a part of Houston. pic.twitter.com/jTSUla7SsS

Harden is on track to win his third consecutive scoring title. He’s averaging 34.4 points, well ahead of second-place Bradley Beal of the Washington Wizards. Beal, who isn’t participating in the restart because of an injury, finished the season averaging 30.5 points. But Hardin’s championship mask? Sadly, it appears to be unintentional.