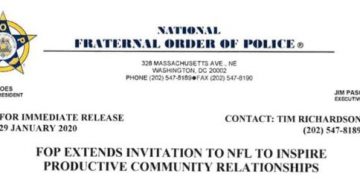 The National Fraternal Order of Police President Patrick Yoes has extended an invitation to the NFL to sit down with any organization “that wants to have a productive, fact-based conversation on the social issues affecting our communities and discuss ways to build bridges between the police and the community.”

According to the press release, the FOP looks forward to having a meaningful dialogue with the NFL to effect positive changes for officers and the communities they serve.

It’s not the first time the FOP has attempted to have a dialogue with the league.

In 2017, then President Chuck Canterbury wrote in a statement that “as private citizens – and as the Fraternal Order of Police… it’s our right to disagree with white supremacists spewing hatred and NFL players kneeling during the National Anthem alike….We also reserve our right to push back against false accusations made about our profession. Law enforcement officers seek to protect our communities and we categorically state that there is no systemic racism in law enforcement.”

The organization then called on the NFL and NFL Players Association to join in a dialogue with the police to unite all sides and “advance common interests.”

This week’s attempt, just a few days before the Super Bowl comes in light of a commercial that will be played during the Super Bowl highlighting the death of Corey Jones.

According to Yoes, “Just as the action of a single player does not reflect the entirety of the NFL, this tragic incident does not define every law enforcement professional…”