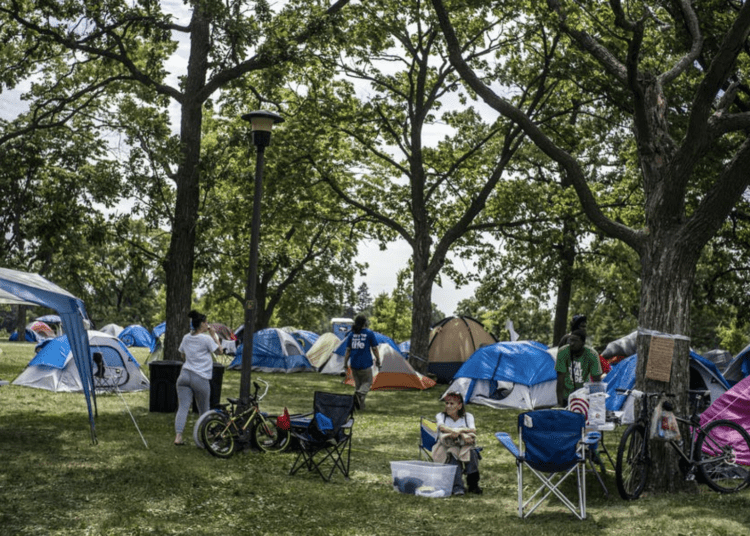 MINNEAPOLIS — A progressive Minneapolis neighborhood that pledged not to call the police in the wake of the death of George Floyd is now dealing with a 300-strong homeless encampment in a local park, according to reports.

As a result of the flood of people in the neighborhood, traffic has reportedly increased around Powderhorn Park, as drug dealers seek to meet their clientele displaced during the civil unrest, rioting and looting following Floyd’s death at the end of May. Moreover, there has been at least one drug overdose inside the park as well as prostitution activity.

Nevertheless, local residents have reportedly agreed to “check their privilege” and “protect people of color” by not involving law enforcement to report instances of property damage, according to the New York Times.

If anyone is put in physical danger, they instead vowed to seek help from the American Indian Movement, which was founded in Minneapolis in 1968 to address systemic issues of poverty and police brutality against Native Americans and has been policing their own communities for years.

However, self-policing a small homogenous society is far different that a heterogenous environment.

Consequently, maintaining the promise not to call the police has proven more difficult than imagined, as some residents have avoided the park altogether. Others said they had trouble sleeping at night, fearing campers would force their way into their homes. Furthermore, residents fear for the safety of their children.

“I’m not being judgmental,” Carrie Nightshade, 44, told the Times, explaining she no longer allows her children, 12 and 9, to play in the park by themselves. “It’s not personal. It’s just not safe.

Another resident, Mitchell Erickson, said he regretted calling 911 when two black teenagers cornered him a block away from his home, held a gun to his chest and demanded his car keys. Erickson said he mistakenly handed over his house keys, and the frustrated teens left him only to steal another car a few blocks away.

“Been thinking more about it,” Erickson said in a text message to a reporter. “I regret calling the police. It was my instinct but I wish it hadn’t been. I put those boys in danger of death by calling the cops.”

“Yeah I know and yeah it was scary but the cops didn’t really have much to add after I called them,” he continued. “I haven’t been forced to think like this before. So I would have lost my car. So what? At least no one would have been killed.”

Joseph Menkevich, who lives in an apartment complex two blocks from the park, said he first called a community activist, who did not pick up the phone, before dialing 911 after finding a black man with a hospital bracelet passed out in the elevator of his building, Fox News reported.

“It didn’t resolve in a way that I had hoped,” Menkevich said. “All they did was offer to bring him back to the hospital. He refused, so they kicked him out on a rainy night.”

Greater New York Black Lives Matter president Hawk Newsome said Thursday, “If this country doesn’t give us what we want, then we will burn down this system and replace it,…” Law Officer reported. “I just want black liberation and black sovereignty, by any means necessary.”

The homeless have taken over Powderhorn Park in south Minneapolis. In response, the City Park Board approved this behavior in all city parks. pic.twitter.com/unt3xkANLm

Residents in the neighborhood historically known for its far-left politics and activism intervened last week when park police gave campers 72 hours to dismantle their tents and leave. The Minneapolis Park and Recreation Board has since passed a resolution not to evict people from any city park and has called for increased funding for longer-term housing for campers, according to the Star Tribune.

“We are not going to kick the can down the road, push people out of public spaces when they have nowhere else to go,” Park Board President Jono Cowgill told the Tribune. “This is not a sustainable, dignified solution for folks who are experiencing homelessness right now, and the state needs to step up.”

The board has put in place more than a dozen portable restrooms, a shower trailer, trash bins and running water and electricity in Powderhorn Park. Volunteers alternate in shifts to distribute food and supplies, offer medical care and counseling and patrol the park at night to ensure safety. Residents have also requested a block party permit to limit some traffic to the park, according to the Times.