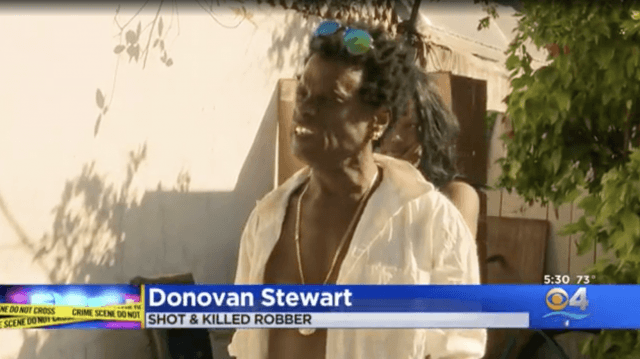 Miami man ’emptied’ Glock into robbery suspect toting AK-47: ‘I’m not going out like a punk’

Miami man ’emptied’ Glock into robbery suspect toting AK-47: ‘I’m not going out like a punk’

MIAMI – A Miami man said he was forced to “empty” his Glock into a man’s chest during a brazen robbery attempt Monday morning, when the attacker pointed an AK-47 into his face and demanded jewelry.

Donovan Stewart, 60, told CBS 4 Miami that he was sitting in his van when he was confronted. Stewart, an NRA member, said he was with his son, 11, and his girlfriend at the time. He told the station that he is originally from Jamaica and is trained at handling a firearm. Naturally, he was concerned for their safety.

“The guy I killed last night, he put an AK-47 to my damn face,” said Stewart. “I am going to defend my life and those I love,” he said. “My family is innocent and just don’t put an AK-47 in my face. I will not allow that to happen. This guy also hijacked a woman in a van and was found with her car key. He robbed another woman at gunpoint.”

“You want to come looking for trouble?” he continued. “Come to me. Come to me. I wouldn’t do anything like this to anybody and they picked the wrong person in this case.”

Stewart had plenty to say regarding his experience.

“I am from Kingstontown in Jamaica,” he said, “and I am not going to go out like a punk. So I emptied my Glock in his chest. This man tried to get in my van while I was sleeping and he was surprised to see what I did.”

A reporter for the CBS affiliate said an individual approached him and told him the now-deceased gunman had robbed him at gunpoint last weekend, in an incident that appeared similar to the robbery described by Stewart.

In that case, the individual was robbed of $600 and a 2018 Volkswagen, according to the report.

Miami Police Officer Mike Vega said while this appears to be a case of self-defense the investigation is still open.

“Everyone is cooperating,” he said, “but we still need to receive more information. We need to put this all together and determine what happened.”