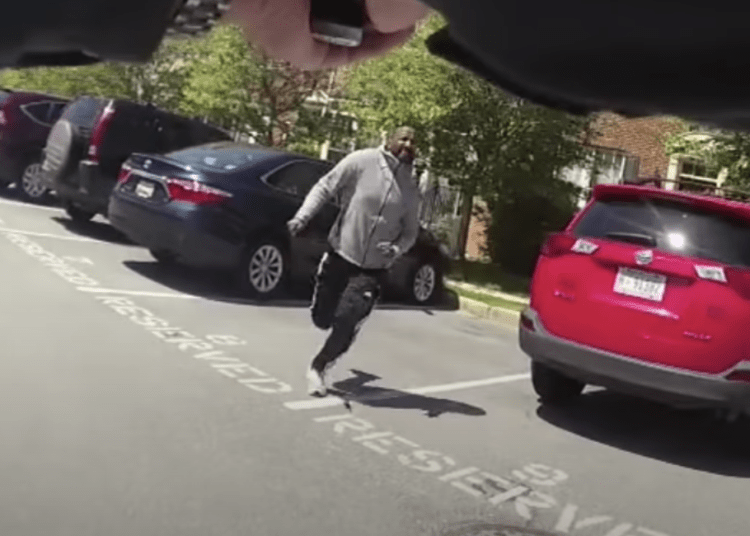 The fatal encounter occurred in the White Oak area of Silver Spring.

Police were summoned to the area due to a rock throwing incident. Sgt. David Cohen was first to arrive on scene. He immediately confronted a non-compliant suspect armed with a large knife.

In the video, Sgt. Cohen is shown exiting his patrol car in the 1500 block of Hadden Manor Court before drawing and aiming his weapon at a suspect identified as Finan H. Berhe, 30, who was holding the knife, WTOP reported.

Berhe runs toward Cohen from a nearby sidewalk before stopping in the middle of the street.

“Put the knife down!” Cohen ordered as Berhe ran toward him and then stopped, momentarily backing away from the sergeant, who appeared to have target acquisition.

“Get on the ground! I don’t want to shoot you!” Cohen shouted just before Berhe charged the sergeant again.

Cohen then fired five rounds, striking Berhe who collapsed to the ground, dropping the knife.

“Man down!” was shouted after the shooting stopped.

Police said investigators recovered a knife that Berhe had raised when charging Cohen, which subsequently led to the shooting.

Berhe did not survive, police said. No officers were injured.

Cohen was the first officer to respond to a call about a man who threw a rock at a neighbor’s window and yelled for them to call police, according to police Chief Marcus Jones and a police department news release.

Berhe was taken to the hospital, where he died, Jones said during a Thursday news conference.

Cohen, a 17-year veteran of the department, has been placed on paid administrative leave while an investigation is conducted, per normal protocol.