The deceased suspect was in possession of three loaded weapons during the exchange of gunfire. 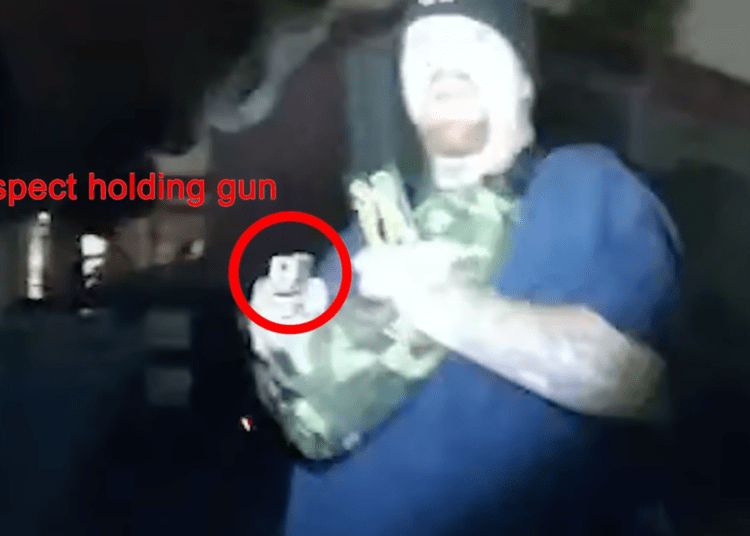 LOS ANGELES – In October LAPD officers engaged a suspect in a foot pursuit. The fleeing man had reportedly crashed a stolen pickup truck. The encounter ended in a gun battle. The suspect died at the scene while the officers did not sustain injury.

The incident began Oct. 11, 2022 at approximately 3:30 a.m. when police attempted an investigative stop of the suspect who was driving a blue GMC pickup truck. He fled and subsequently crashed into a tree on the traffic medium on East E Street before fleeing on foot. Following the collision, officers learned the truck was reported stolen. After a brief search of the area, officers located the suspect hiding in some nearby bushes. Upon being discovered, the man fled.

The officers chased the suspect on foot from East E Street onto northbound Quay Avenue. At one point during the foot pursuit, the male perpetrator pointed a semi-automatic handgun at pursuing officers. As a result, police fired at the man, but he continued running. Officers redeployed and took cover behind nearby parked vehicles as they radioed for assistance, Breaking 911 reported.

The suspect took cover behind a parked semi-truck trailer and fired several additional rounds at police. Approximately five minutes after the shooting began, the suspect pointed a firearm at pursuing officers at which point they shot the suspect and were able to finally approach and take him into custody.

Los Angeles Fire Department personnel responded and pronounced the suspect dead at the scene. No officers were injured during the OIS.

According to Breaking 911, police recovered the following evidence near the suspect’s body:

The deceased suspect was later identified by police as 41-year-old Jason Sanderson of Torrance.

LAPD’s specialized Force Investigation Division responded to the scene and are investigating the OIS.