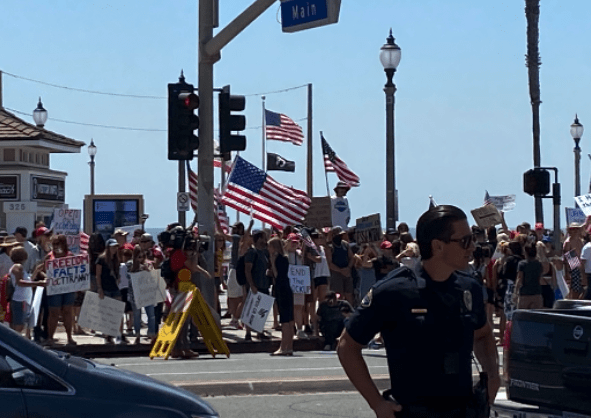 We have witnessed a wide variety of opinions regarding the role of law enforcement officers during the stay-at-home orders and other directives issued during the coronavirus pandemic.

There is a divide

It’s a topic that has created a divide in the ranks. Some want no part of enforcing the rules, while others are ready to “kick a** and take names,” similar to going after violent felons. Moreover, we’ve seen some members of our blue family willing to lock anyone up who dares to defy orders issued by the government, which has dramatically infringed on our constitutional rights.

It’s been downright alarming to watch some of our brothers and sisters in blue take an overly aggressive approach to people violating mask protocols, stay-at-home orders, etc.

However, I’ve also been proud to see some law enforcement leaders taking a measured approach, understanding the climate of our health crisis without forgetting that We the People agreed to press pause on our rights for a limited time while getting a lid on the health crisis.

Yet there is an expiration date, and we appear to be there as we weigh health concerns against the economic realities, not to mention the psychological fallout that is growing daily.

Keep in mind these “orders” are not legislated laws. Under the scope of constitutional scrutiny, they are demands that carry a punitive hammer. But as the “rules” have been legally challenged, they crumble like a graham cracker.

“On Holy Thursday, an American mayor criminalized the communal celebration of Easter,” declared U.S. District Judge Justin Walker when ruling against the City of Louisville. “The Mayor’s decision is stunning. And it is, ‘beyond all reason,’ unconstitutional.”

Mayors and governors are not independent lawmakers. We have the separation of powers for a reason, and this is it.

Police officers have been caught between the proverbial “rock and a hard place.” They are sworn to uphold the Constitution, but they are also under compulsion to obey superiors. When police officers receive directives, they generally do not consider the constitutionality of such orders. But now more than ever, those commands are increasingly unconstitutional, which means they are at least considered bad practice if not downright unlawful.

Substance of an oath

Almost all “orders” related to COVID-19 violate the Bill of Rights in one way or another. Therefore, any government agency taking an aggressive enforcement approach, including the physical use of force, should reconsider its actions. We (peace officers) swore an oath to support and defend the Constitution of the United States against all enemies, foreign and domestic.

Historically, the enemy has been far more recognizable. Yet now it is masked in the zeal of political leaders willing to discard the Constitution as they flex their power with the explicit desire to be powerful. This is more than the “slippery slope” we often use as an idiom, it’s a “tidal wave” crashing down on freedom and the blood that was shed to obtain and defend it.

Therefore, police officers need to reflect upon the substance of the oath they took when their badge was pinned in place.

So, am I’m calling political leaders urging aggressive enforcement of “rules” as our enemy? If they continue to repress liberty, freedom, or the values that created American exceptionlism, they are not acting like a friend to our way of life. As a matter of fact, the more these individuals demand compliance with unreasonable demands, the more they sound like third-world dictators. Hence, an enemy!

Some of the tyrants have claimed, “rule of law” when demanding blind allegiance to their demands. First, they need to be reminded they’re not legislators. Second, they also need to be taken back to civics class since they are discounting the Supremacy Clause. It establishes that the federal Constitution, and federal law generally, take precedence over state laws, and even state constitutions. It prohibits states from interfering with the federal government’s exercise of its constitutional powers, and from assuming any functions that are exclusively entrusted to the federal government, cites Cornell Law School.

Our country has taken prudent steps to decrease what has been defined as a pandemic. However, some people have weaponized it as they pursue a distorted ideology. Tyrants have evolved in too many pockets of America.

Consequently, it might be a good idea to reflect on the laws, which are being trampled so willy-nilly.

The first 10 amendments to the Constitution make up the Bill of Rights. James Madison wrote the amendments, which list specific prohibitions on governmental power, in response to calls from several states for greater constitutional protection for individual liberties. For example, the Founders saw the ability to speak and worship freely as a natural right protected by the First Amendment. Congress is prohibited from making laws establishing religion or abridging freedom of speech. The Fourth Amendment safeguards citizens’ right to be free from unreasonable government intrusion in their homes through the requirement of a warrant.

From the Bill of Rights Institute:

Congress shall make no law respecting an establishment of religion, or prohibiting the free exercise thereof; or abridging the freedom of speech, or of the press; or the right of the people peaceably to assemble, and to petition the government for a redress of grievances.

A well-regulated militia, being necessary to the security of a free state, the right of the people to keep and bear arms, shall not be infringed.

No soldier shall, in time of peace be quartered in any house, without the consent of the owner, nor in time of war, but in a manner to be prescribed by law.

The right of the people to be secure in their persons, houses, papers, and effects, against unreasonable searches and seizures, shall not be violated, and no warrants shall issue, but upon probable cause, supported by oath or affirmation, and particularly describing the place to be searched, and the persons or things to be seized.

No person shall be held to answer for a capital, or otherwise infamous crime, unless on a presentment or indictment of a grand jury, except in cases arising in the land or naval forces, or in the militia, when in actual service in time of war or public danger; nor shall any person be subject for the same offense to be twice put in jeopardy of life or limb; nor shall be compelled in any criminal case to be a witness against himself, nor be deprived of life, liberty, or property, without due process of law; nor shall private property be taken for public use, without just compensation.

In all criminal prosecutions, the accused shall enjoy the right to a speedy and public trial, by an impartial jury of the state and district wherein the crime shall have been committed, which district shall have been previously ascertained by law, and to be informed of the nature and cause of the accusation; to be confronted with the witnesses against him; to have compulsory process for obtaining witnesses in his favor, and to have the assistance of counsel for his defense.

In suits at common law, where the value in controversy shall exceed twenty dollars, the right of trial by jury shall be preserved, and no fact tried by a jury, shall be otherwise reexamined in any court of the United States, than according to the rules of the common law.

Excessive bail shall not be required, nor excessive fines imposed, nor cruel and unusual punishments inflicted.

The enumeration in the Constitution, of certain rights, shall not be construed to deny or disparage others retained by the people.

The powers not delegated to the United States by the Constitution, nor prohibited by it to the states, are reserved to the states respectively, or to the people.

Anyone who argues the Bill of Rights are outdated, irrelevant, or should otherwise be disposed of, is in fact an enemy of our country. Shut them down and vote them out of office!

Share and speak up for justice, law & order...
Tags: Bill of Rightsconstitutional scrutinyrulesseparation of powersU.S. Constitution