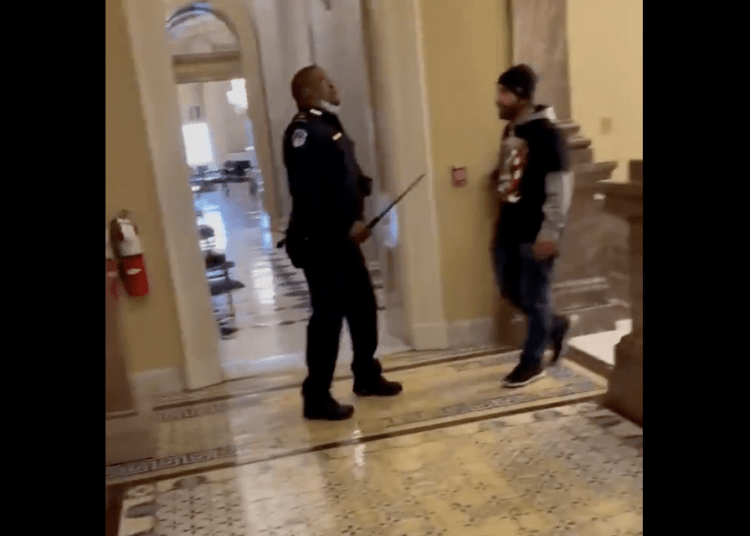 A man identified as Doug Jensen led the charge up the stairs at the Capitol on Wednesday. (Twitter)

WASHINGTON — A man captured in several videos and photographs at Wednesday’s siege of the U.S. Capitol has been identified in local news reports as 41-year-old Doug Jensen.

Jensen, a Des Moines, Iowa, native, was seen wearing a QAnon T-shirt depicting an eagle and the conspiracy theory motto, “Where we go one, we go all.”

In a video posted by Igor Bobic, Jensen is one of the first in the mob to push past a Capitol police officer and into the building, Fox reported.

The Washington, D.C. Metropolitan Police posted a photo of Jensen as they solicited information regarding people involved in the invasion.

Here’s the scary moment when protesters initially got into the building from the first floor and made their way outside Senate chamber. pic.twitter.com/CfVIBsgywK

Jensen has an active presence on social media and his Twitter and Facebook pages show multiple pictures of himself from the day.

According to KCCI-TV, Jensen is a laborer at Forrest & Associate Masonry. Company CEO Richard Felice told the outlet that his firm does not agree with Jensen’s conduct.

(His Facebook page is no longer available for public view.)