Man who lounged at Pelosi’s desk, GOP lawmaker charged with crimes at Capitol 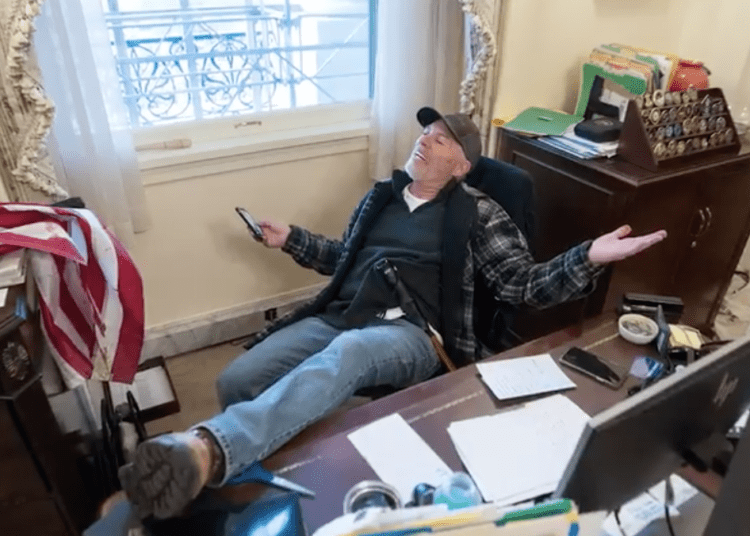 Richard Barnett was identified as the man who was caught in a now-infamous viral photo lounging back in Pelosi’s chair in her private congressional office. (New York Post screenshot)

WASHINGTON — A man who smugly enjoyed a few moments as he sat at House Speaker Nancy Pelosi’s desk and a West Virginia lawmaker who filmed himself storming the US Capitol were among those charged Friday over the chaos, authorities said.

Richard Barnett was identified as the man who was caught in a now-infamous viral photo lounging back in Pelosi’s chair in her private congressional office with his feet up on her desk as part of the mob infiltrating the building. He turned himself into the Benton County Sheriff’s Office in Little Rock, Ark., Friday morning, KNWA reported.

He allegedly stole a letter from Pelosi’s office meant for US Rep. Bill Long (R-Mo.).

Meanwhile, the West Virginia delegate Derrick Evans — who recorded himself inside the Capitol Rotunda on Wednesday shouting, “We’re in, baby!’’ — was federally charged with entering a restricted area, the Justice Department said, according to the Post.

Evans was expected to be released from federal custody Friday afternoon, according to WDTV in West Virginia.

Law Officer is the only major law enforcement publication and website owned and operated by law enforcement. This unique facet makes Law Officer much more than just a publishing company but is a true advocate for the profession.
Share—and speak up for law & order...
Tags: Derrick EvansRichard Barnett