St Louis prosecutor to detective: 'I suggest you quickly reassess this evidence' 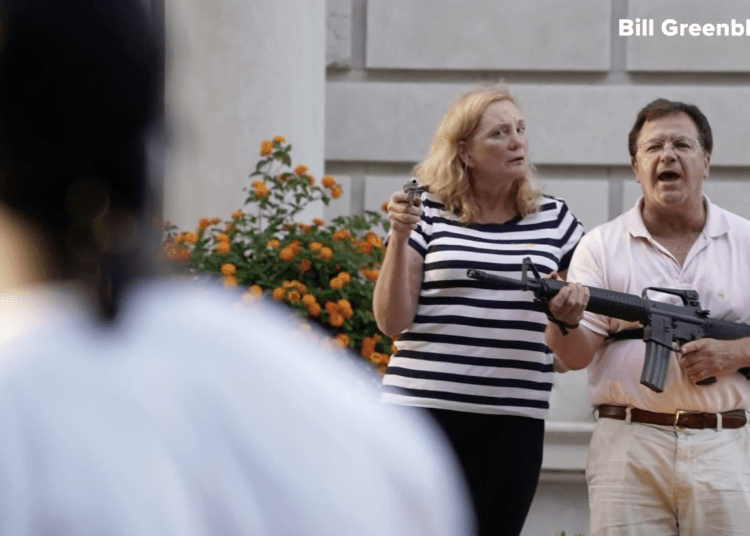 (Screenshot 5 On Your Side)

ST. LOUIS — The lead St. Louis police detective investigating the McCloskey case refused to sign at least two versions of court documents prosecutors drafted, according to a review of those documents obtained by 5 On Your Side.

Moreover, police contend at least one person in the marching mob was armed and another was wearing some form of body armor, after analyzing videos taken June 28, when the couple confronted protesters with firearms.

The case has attracted national attention since photos and video of the armed McCloskey’s protecting their property against a gaggle of protesters went viral.

Critics have said Circuit Attorney Kim Gardner should not charge Mark and Patricia McCloskey because the state’s Castle Doctrine and stand-your-ground laws allow them to defend their property against perceived threats.

The documents obtained by 5 On Your Side include an email Gardner’s Assistant Circuit Attorney Chris Hinckley sent to the lead investigator on the case, Sgt. Curtis Burgdorf. Hinckley emailed police the day before the McCloskeys were served with a search warrant, stating it needed to happen “now.”

“At this point, everything points to these weapons being real and loaded, but no one has asked or confirmed,” he wrote. “Come trial, they’ll say they were waiving around a BB gun and an air rifle.”

“Our office is receiving inquiries from the public and press about a warrant application and potential charges. We’ve thus far said the matter ‘remains under investigation.’ I’d really like to avoid pointing to a police follow-up request as the hold-up, but I won’t control the messaging if this goes on any longer. Please see what you can do to help this along. Again, I’m asking for priority on the firearms issue.”

When the search warrant was served the McCloskey’s had their weapons seized. The rifle Mark McCloskey used was intact when it arrived at the crime lab. The handgun Patricia McCloskey used was not, according to documents obtained by 5 On Your Side.

Hinckley ordered the crime lab to disassemble and reassemble Patricia McCloskey’s gun and signed a court document stating that it was “capable of lethal use” at the time she pointed it at protesters.

In a motion, Gardner wrote that the law allows prosecutors to say both of the McCloskeys guns were readily capable of lethal use, “even without proof that they were functional or loaded at the time of the incident.”

The McCloskey’s attorney, Joel Schwartz, said Patricia McCloskey’s gun was not functional because it was once used as a prop in a trial. The McCloskeys are both attorneys.

He said Gardner’s interpretation of the law is wrong.

“It’s a loose interpretation of the statute and the law requires a weapon to be operable at the time of an offense,” he said.

A spokeswoman for Gardner said she could not comment on a pending case.

Hinckley also authored the document the lead detective eventually signed, known as the probable cause statement.

But it went through at least two revisions after Burgdorf outlined 14 concerns he had about the document, 5 On Your Side has learned.

5 On Your Side also obtained a voice mail Hinckley left Burgdorf after he wrote his response to Burgdorf’s objections.

On it, he states: “Curtis, you need to call me back. I wrote a long email to you trying to ask a bunch of questions about whatever it is you said some was (expletive). Now we need to straighten this out because I’m about done with this crap. Call me back.”

Since the couple was charged July 20, Burgdorf’s investigation has continued, according to the documents.

He noted in follow up reports that at least one of the protesters was armed with a handgun, and another was wearing a bullet-resistant vest with the words, “Human Shield” on it.

Furthermore, some of the phrases he was able to decipher from the footage collected by prosecutors from protesters included:

“You own a business. Your business is gone.”

“We coming back baby.”

“You ain’t the only (expletive) with a gun.”

“They coming back to your house.”

In another livestream video, Burgdorf wrote a man was heard saying, “I was in front so I was the one who opened the gate. The gate was broken after they pulled a gun. What law did we break? We keep guns there but not for show though. Not to look a certain way, but for use. If they would’ve shot then they would’ve been put down.”

The only thing Burgdorf wrote from what he could hear from the McCloskeys included Patricia McCloskey shouting “Go,” as she pointed her gun at demonstrators.

The case is troubling to Second Amendment advocates as well as anyone who believes armed self-defense of property and personal safety is a cornerstone of legal jurisprudence. People are accusing Gardner, who is a George Soros funded Democrat, of a political prosecution.

California Attorney General Xavier Becerra, also a Democrat, filed criminal charges against the husband of the Los Angeles County district attorney after he was recorded pulling a firearm on BLM protesters back in March, during an incident where he demanded they “get off of my porch.”

David Lacey, the husband of District Attorney Jackie Lacey, was charged with three misdemeanor counts of assault with a firearm against three people.