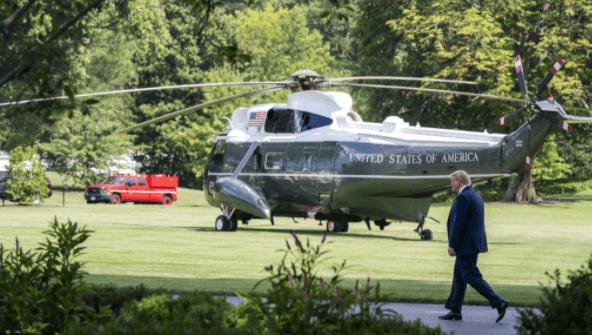 President Donald Trump prepares to board Marine One. (Public Domain)

WASHINGTON — The man known as the law and order president is leaving the White House, much to the dismay of a majority of people in uniform. President Trump is departing on Wednesday morning, the final time as president, hours before his successor President-elect Joe Biden will take the oath of office at noon.

Trump will walk out of the White House to Marine One for the short ride to Joint-base Andrews where he will make farewell remarks before boarding Air Force One for the flight to his Florida resort, Mar-a-Lago, New York Post reported.

He’s expected to arrive in West Palm Beach around 11 a.m. – an hour before his presidency ends.

In a farewell address released via video on Tuesday, Trump said the populist movement he created when he won the presidency in 2016 will continue to live on.

“My fellow Americans, four years ago we launched a great national effort to rebuild our country, to renew its spirit and to restore the allegiance of this government to its citizens. In short, we embarked on a mission to make America great again for all Americans,” Trump said.

“Now, as I prepare to hand power over to a new administration at noon on Wednesday, I want you to know that the movement we started is only just beginning,” he said.

Trump was endorsed by several large police organizations, received more than 74 million votes, an increase of 11 million from 2016, yet the obstacles proved too numerous to overcome. He not only had to campaign against an opponent, but nearly every institution and media outlet in the country. The well coordinated attacks against him were successful. He will leave office as progressive liberals assume power.

While his personality is smeared, the accomplishments of the 45th President of the United States are unassailable.

Trump will be the first president in 152 years not to attend the inauguration of his successor.