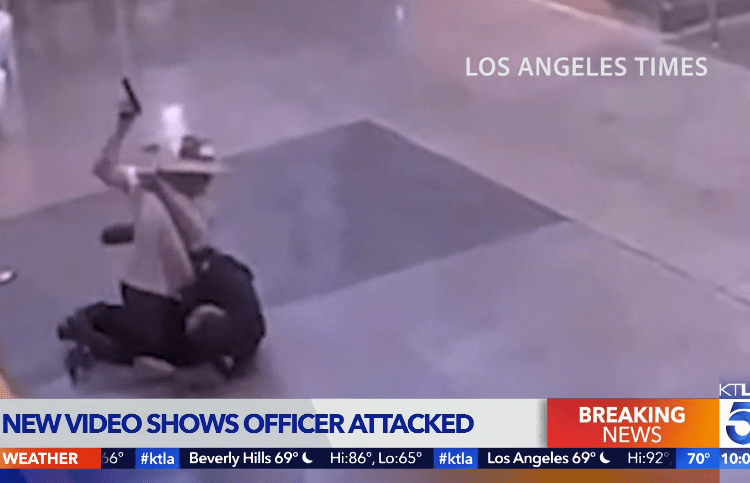 Video shows an LAPD officer getting pistol whipped at the Harbor Station in San Pedro. (LAPD via KTLA)

LOS ANGELES — A security video from inside LAPD’s Harbor Division where a veteran officer was brutally attacked this weekend shows the officer get knocked to the ground and repeatedly pistol-whipped with his own firearm before the attacker points the weapon at the officer’s chest at close range.

The video, obtained by The Los Angeles Times, reveals for the first time the full and potentially deadly nature of the Saturday night attack on the 37-year department veteran, KTLA reported.

Police sources said investigators believe the man repeatedly pulled the trigger, creating a clicking sound each time, but that a safety mechanism on the gun prevented it from firing — saving the officer’s life.

The suspect was identified as Jose Cerpa Guzman. He is being held on suspicion of attempted murder of a police officer. His bail was set at $2.23 million.

The officer, who has not been identified, was taken to a local hospital but escaped with “bumps and bruises,” according to LAPD Chief Michel Moore.