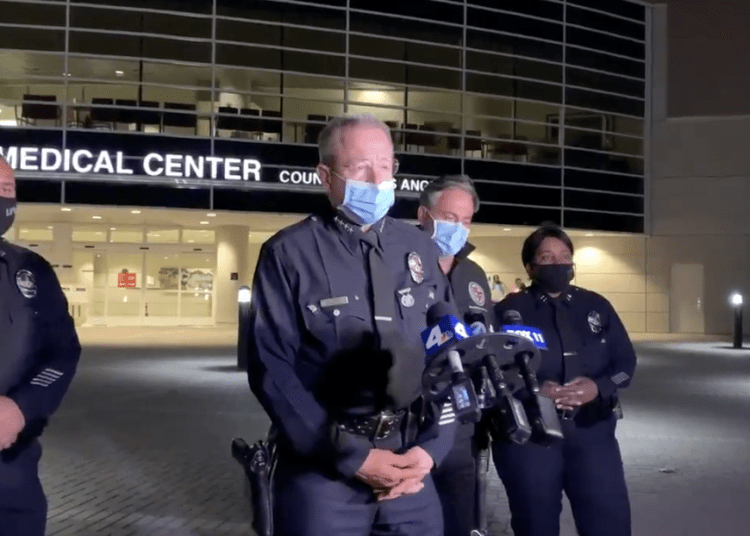 LOS ANGELES — A suspect was in custody Saturday night after an LAPD officer was disarmed and “pistol-whipped” during an attack inside the department’s Harbor Station in San Pedro, according to reports. The suspect reportedly fired rounds, but the officer’s injuries were not the result of gunfire.

The officer was hospitalized and was expected to survive, Los Angeles Police Chief Michel Moore tweeted.

Moore said the officer suffered “bumps and bruises” but wasn’t shot. He said he had spoken to the officer who was in stable condition at the hospital. He didn’t say how serious the officer’s injuries were, FOX reported.

“He is resting and will be ok…Harbor units responding pursued suspect and took him into custody,” Moore wrote on Twitter.

Moore told reporters the 29-year-old suspect walked into the lobby of the station and the officer went out to speak to him.

Lesley Marin, a reporter at CBS Los Angeles, tweeted, “The suspect was able to get a hold of officers gun, fired rounds but none hit. Another officer was able to shoot at suspect, not hit. Officer believed to have been pistol whipped.”

Chief Moore:suspect walked into @LapdHarborDiv and got into an altercation with desk officer. The suspect was able to get a hold of officers gun, fired rounds but none hit. Another officer was able to shoot at suspect, not hit. Officer believed to have been pistol whipped. pic.twitter.com/Um4NCpDzlQ

“It escalated into some type of altercation. During that altercation, it appears at this very early stage that the officer’s weapon was taken from him and rounds were fired by the individual at the officer,” Moore said in an early Sunday morning press conference outside of the hospital where the officer was being treated.

Spoke with officer at hospital. He is resting and will be ok. Bumps and bruises. He was not shot. Harbor units responding pursued suspect and took him into custody.

Bill Melugin of FOX 11 in Los Angeles also reported the suspect had been pistol-whipping the officer after grabbing his gun. His report clarified earlier accounts saying the officer was possible shot.

UPDATE: Multiple sources tell me it now appears the officer was repeatedly pistol whipped on his head by the suspect, not shot. @FOXLA

The Saturday crime came exactly two weeks after two Los Angeles County Sheriff’s deputies were shot in the head in an “ambush” attack while sitting in a patrol car near a Compton Metro station. Both deputies underwent surgery and are recovering at home after being released from the hospital.