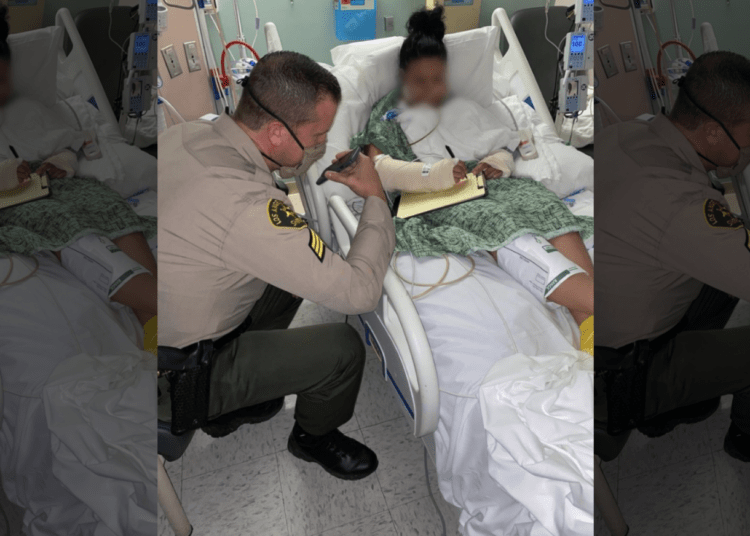 Due to her injuries, the deputy could only write down her response, which was relayed to President Trump by an LASD Sergeant. (LASD Transit Services Bureau)

LOS ANGELES — A woman who was one of two Los Angeles County sheriff’s deputies wounded in an ambush attack that shocked the law enforcement community was released from the hospital Monday, officials said.

Her partner, a 24-year-old man, was released Sept. 16. The Los Angeles County Sheriff’s Department tweeted that both have a “long road to recovery.”

“Great News… both of our Deputies from the #ComptonAmbush have been discharged from the hospital and are resting,” the department wrote. “They both have a long road to recovery and #LASD appreciates your continued prayers and all the support. #LASDStrong.”

Great News… both of our Deputies from the #ComptonAmbush have been discharged from the hospital and are resting. They both have a long road to recovery and #LASD appreciates your continued prayers and all the support. #LASDStrong pic.twitter.com/FAXt1yalmp

The 31-year-old mother had been in an intensive care unit prior to her release, FOX News reported. Both deputies graduated from the training academy 14 months ago.

They were wounded Sept. 12 while sitting in their marked patrol unit outside a Metro transit station in Compton. A gunman approached the vehicle on foot, and with with no provocation, unleashed several rounds before fleeing.

On Friday, Sheriff Alex Villanueva said investigators were following up leads and were looking for a witness captured on video near where the shooting took place.

Thus far, no suspects have been identified, FOX reported.

Last week, President Trump called the deputies as they were recovering in the hospital. The female deputy, the mother of a six-year-old son, was shot in the jaw and arms. Her injuries prevented her from talking, so she wrote her response, which was relayed to the President by a sergeant who sat next to her.

The reward for information leading to the capture of the gunman has reached more than $700,000, officials said.