Lamar Mitchell has several prior convictions for violent offenses 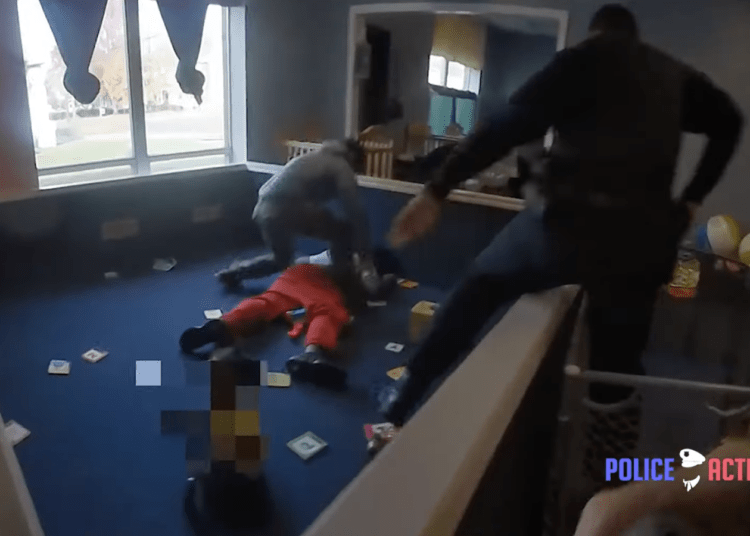 Warren police arrested Lamar Mitchell after he fled into a daycare center. (YouTube)

WARREN, Ohio – An Ohio man was arrested after fleeing from police and running into a daycare center in the city of Warren during a drama filled chase last week.

The Warren Police Department said the incident began when an officer tried to stop Lamar Mitchell, 39, who was wanted for a felony assault that occurred on Nov. 2. Yet the outstanding suspect fled in his vehicle and crashed into another automobile in the area of North Park Avenue and Washington Street NE. Following the collision, Mitchell fled on foot, FOX 8 Cleveland reported.

Officers gave chase while the fleeing suspect forced his way through the rear entry of a daycare center as an employee tried to close the door, police said.

Mitchell appears to briefly make a shooting motion toward pursuing officers with his fingers as he enters the building. An officer unsuccessfully deploys his Taser as the suspect continues into the facility, police bodycam video shows.

The suspect then ran into a room with several young children and jumped into a playpen area with a toddler inside. Officers then hopped the small playpen barrier and subdued Mitchell on the floor.

“Get him cuffed. Get the kids please, get the kids!” one of the officers is heard directing, with children crying in the background.

As officers handcuffed Mitchell, a daycare staff member picked up the toddler from the playpen while others removed children from the building, according to the news outlet.

Mitchell faces 13 new charges in addition to the original felonious assault, including aggravated burglary, failure to comply, multiple counts of aggravated menacing and traffic offenses. He made a court appearance Thursday morning and is currently being held on a $250,000 bond.

According to FOX 8, Mitchell has an extensive criminal history in Trumbull County. The news outlet said he engaged police in a two-hour SWAT standoff in August of 2021 after officers were called to the scene believing that Mitchell, who was wanted on a felony escape charge, was inside.

During the standoff, Mitchell reportedly threatened to kill officers, who backed out of the building before he surrendered a few hours after the initial response.

Mitchell later pleaded guilty to a charge of burglary with firearms specifications and received a 6-month sentence.

In 2015, Mitchell received a four-year prison sentence for aggravated arson after setting his girlfriend’s house on fire because she filed an assault complaint against him.

In 2010 he was sentenced to two years in the Lorain Correctional Institution on a charge of improperly firing a firearm at or into a habitation, according to court records.