Kaepernick Likely To Be Cut From Team 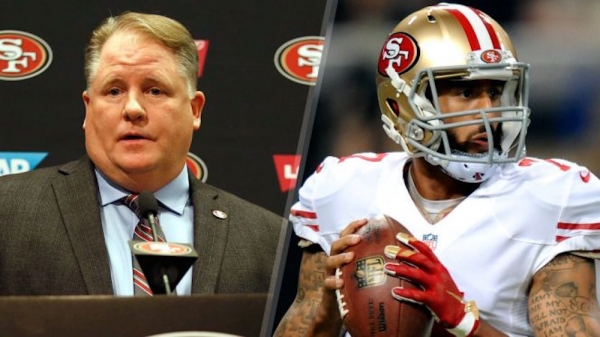 A report from Fox Sports analyst Jay Glazer has indicated that the San Francisco 49ers are likely to part ways with embattled quarterback Colin Kaepernick.

“Regardless of politics or not, he has a very, very big uphill battle to make this team. I’d be shocked if he’s on the 49ers by the time this season ends. It has nothing to do with political views whatsoever. He lost a ton of weight this offseason, had three surgeries, couldn’t work out, lost that double threat, that size-speed ratio. No political views, he just hasn’t been effective. He’s regressing as a player. I’d be shocked if he’s on this roster by the end of this year. He may not be on it in the next two weeks,” Glazer said Monday on Fox Sports,

The revelations by Glazer make one wonder if his refusal to stand during the National Anthem had more to do with intimidating team management from cutting him.  We would imagine that Kaepernick’s political statement could be used by him or his agents in an effort to prevent what NFL experts say is likely regardless, Kaepernick will no longer be a San Francisco 49er.

If so, the move was dangerous considering other NFL teams will be very hesitant to take a chance on him.

As we said over the weekend, Kaepernick is a young man that has likely been indoctrinated by the mainstream media.  He has talent and as much as we disagree with what he did, there are many that the lies from the media are affecting.  Despite being guaranteed 12 million in 2016, Kaepernick stands to pay a big price for his ignorance.