Kaepernick: “I Will Continue To Sit” 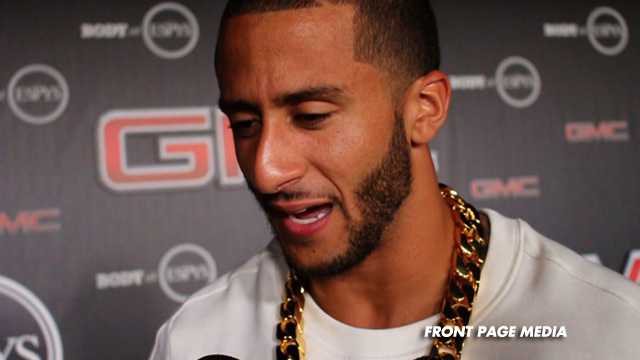 In a 20 minute interview with reporters on Sunday, San Francisco Back-up Quarterback Colin Kaepernick said that he will continue to sit during the national anthem until there is “significant change” with police brutality.

He did not give specifics as to what that change would be.

Kaepernick has been in deep support of Black Lives Matter and has constantly raised awareness through social media on xenophobia, racism and human rights since last year.

It has been reported that in July 2015, Kaepernick converted to Islam and he is engaged to Nessa Diab, a Black Lives Matter activist who promotes what she calls “authentic Islam.”

Since Kaepernick did not specify what changes he wanted to see, we can only assume that he agrees with those individuals that are influencing his life.

Here are just a few demands from Black Lives Matter:

Those just a few of the so called “commonsense” suggestions from the organization that Kaepernick agrees with so if you think he is going to stand anytime soon, he won’t if this is what he is waiting on.

Ultimately, we don’t hate Kaepernick.  He is a talented young man that is misinformed.  He is being influenced by a powerful media that cares nothing about fairness and Kaepernick is a victim of that.  We hope his career is not severely impacted by a media that cares nothing for him or anyone else.  They care about the money and as long as they can keep the emotions high, they can convert the click and viewers into money.  This is their only goal.

As far as Kaepernick goes, we would welcome the opportunity to educate him and show him the “full” picture of a portrait that he is risking his career and reputation on.