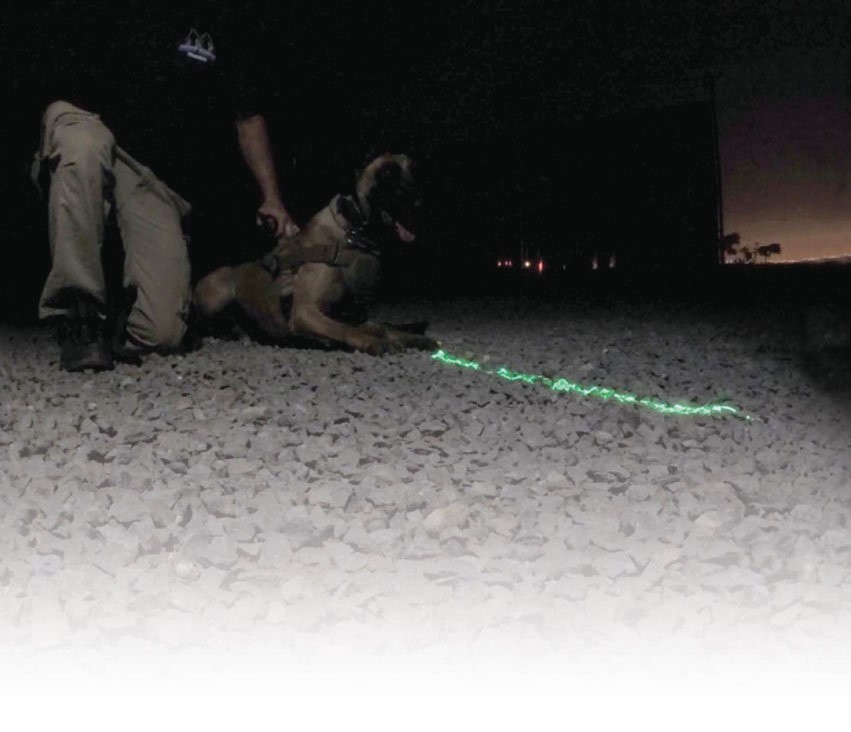 The utilization of lasers for police special operations or SWAT units appears sexy to the outside observer, but in reality it is a common and effective tool for these units. But how often are those units integrating the lasers into training? How many of the units are integrating a K-9 officer into training? In the K-9 training world there will always be different opinions, but the one thing that we can all agree on is the need for scenario-based training to ensure a successful mission. If conducted properly, laser training for K-9 teams can improve the overall success rate of operations. When thinking about how to apply your dog team or teams, a few key steps must take place.

First, educate members of leadership about the role a dog will play in SWAT operations. If you’re pitching to a SWAT Commander, pull the team use statistics. How many times were runners deployed on a warrant search where a properly placed K-9 unit on perimeter could have apprehended a fleeing suspect, for example? How many times did team members have to advance to search an area in the dark where a K-9 unit could have minimized their risk and likely searched the area faster anyway? Seek out neighboring agencies or other professionals in the K-9 community that are in good standing with your agency or unit and pick their brains on the proper approach.

The next step is to determine your training theory when integrating into another unit. Let’s face it: K-9s are an important but small piece of the dynamics of a special operations unit. You must know your training philosophy principles before trying to demonstrate it on the fly in front of others who may have less confidence in integrating your dog team if you look confused or allow other officers to talk you out of your training methods.

Introducing the Laser
There is debate on which color laser to use. In my personal experience, I have found the green laser beam to be most successful. It allows for contrast, as many weapon sight beams or Tasers are red. Imagine more than 20 SWAT members executing a night mission with red laser beams going everywhere, and the negative impact that could have by prematurely putting your K-9 partner in drive; or the liability of a fellow officer targeting a red beam for Taser use on a suspect for compliance and a dog that won’t calm down after seeing the red beam. Again, this gives you a pathway—through repetitive training—to teach your dog that a green beam is for work and a red beam is to be ignored.

Training
Just because we are imprinting laser beams does not mean we need to train only at night. A building capable of changing from medium light to low light to dark with a large room, long hallways and doors is a great option, and can be found almost anywhere. Below are the steps I utilize for this type of training, in sequential order:

When considering laser beam placement, remember that dogs lack depth perception. Do not rush or try to force progress too quickly; the more spaced out the training can be the better.

Keys to Success
If at any point the dog gets off track of the laser beam and goes astray, immediately call them back to the beginning or starting point, into a down position and start the drill over. When you consider laser beam placement, remember that dogs lack depth perception. Do not rush or try to force progress too quickly. Doing all this training in one day is not recommended. Spacing it out gives more opportunity to make the time with your partner positive and keep them interested in the laser beam. Also, once you begin to integrate night training to include outdoor objects, vehicles and structures, don’t forget to leave some of these areas empty. I often see handlers and trainers make the mistake of abandoning their basic working dog training principles once they get the dog tracking on a laser beam, creating issues where the dog expects a find every time the laser is used.

In closing, a properly trained working dog team with laser as a capability can be quite impressive. Essentially, your agency or unit immediately possesses a tool that can search vehicles, entry control points, doorways or structures at great distances as well as apprehend or locate suspects in low light and night scenarios that are typically most dangerous for law enforcement officers. It also demonstrates immense control over your dog and gives you the ability to search partitioned or specific target areas where you don’t have the time to allow the dog to conduct an open area search.

I would also suggest training with your team sniper, designated marksman or cover officers, and that they too carry a green laser on their person during operations. This gives the ability for them to paint targets for your dog from a greater distance so you can concentrate on the dog application and cover situations. An example would be searching a 50,000 square-foot warehouse for a suspect, where, upon your arrival cover officers point out an area where they heard a noise. This gives you an immediate avenue to channel your partners search area at night or in dark rooms and most importantly is another opportunity to keep police officers, security personnel and military personnel safe while doing their jobs.

Eric J. Rose is a former lead trainer with the U.S. Navy SEALS and currently a subject matter expert for K-9 operations with Pinkerton. He can be reached at[email protected].