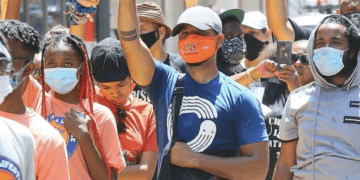 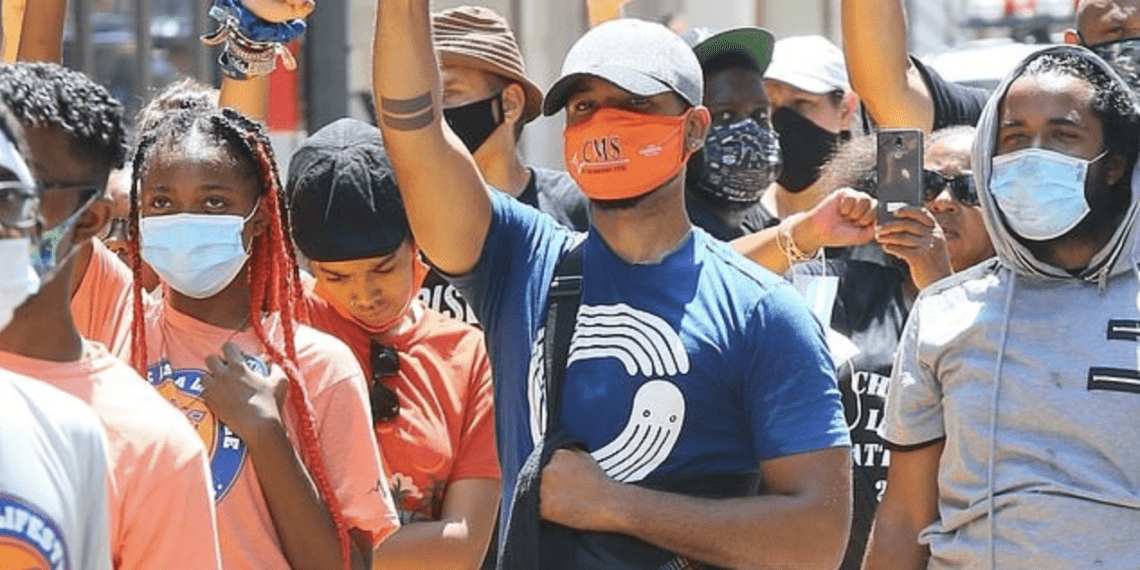 Jussie Smollett, 38, raised a fist in solidarity with the Black Lives Matter movement at a protest outside of the Trump Tower in New York City on Saturday. (Daily Mail Twitter)

NEW YORK — Troubled actor Jussie Smollett, the man who is accused of staging an infamous hate crime hoax to advance his career, attended a Black Lives Matter protest outside Trump Tower in New York where he raised a fist in solidarity, according to The Daily Wire.

“Wearing a baseball cap and an orange face mask, the star who appeared in the series Empire gathered with other demonstrators outside Trump Tower to fight against systemic racism and police brutality,” reported  Daily Mail.  “The tower has been an epicenter for protests in the city where Mayor Bill de Blasio helped paint a Black Lives Matter mural on Fifth Avenue facing Trump’s building.”

“Smollett wore a blue T-shirt and jean shorts for the protest and was recognized by his distinctive equal sign tattoo on his right arm,” the report continued. “It’s not clear what group he was protesting with.”

In early 2019, the “Empire” actor claimed he was victimized to a hate crime late during a cold, wintery Chicago night. He claimed that two men who abused him with homophobic slurs and then yelled “this is MAGA country” before tying a noose around his neck. At first, the media took Smollett’s story at face-value until evidence quickly mounted that he had hired two brothers from Nigeria to stage the attack, supposedly in an effort to boost his salary on the show.

After Smollet turned himself into police for the felony charge of filing a false police report, the situation took a turn for the worse when the charges were surprisingly dismissed by Chicago prosecutor Kim Foxx, prompting outrage from both the Chicago Police Department and then Mayor Rahm Emanuel. In an obvious attempt to rectify the situation and regain city trust, a Chicago judge appointed a special prosecutor to investigate the way his case was handled.

As a result, Smollett has since been indicted on charges of disorderly conduct. Furthermore, the city of Chicago is also suing him for $130,000 in wasted police resources. He has failed to have the charges dropped on the basis of double-jeopardy.