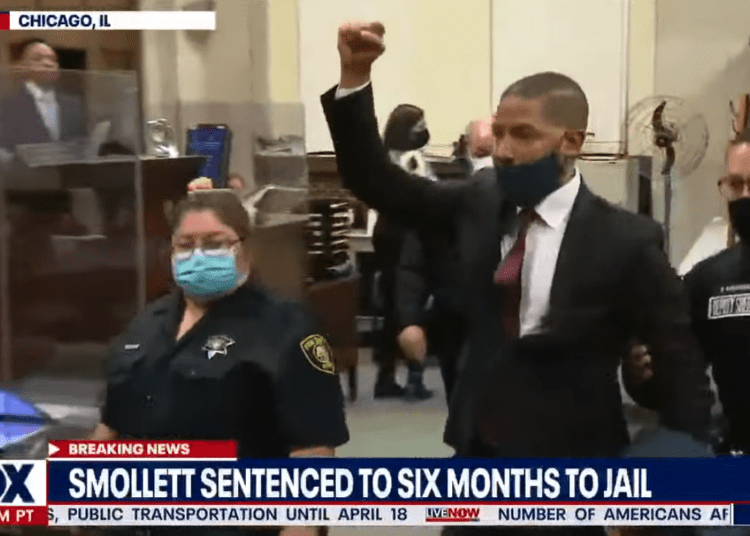 Jussie Smollett was defiant as he was remanded to custody.

CHICAGO – Jussie Smollett was sentenced on Thursday for staging a dramatic hate crime hoax that became an international story as his attorneys continued to fight to have the case thrown out.

Smollett, 39, was found guilty in December on five of six counts related to felony disorderly conduct and making false reports. He claimed to be the victim of a hate crime in January 2019 before the charade unraveled, Law Officer reported at the time of his conviction.

Once details of the investigation became public knowledge, almost no one in the country believed the tall tale except people who needed the purported crime to fit their political narrative.

Defense lawyers argued motions for slightly more than an hour Thursday afternoon followed by prosecutors rebuttal for the next hour, before the judge recessed court.

When the parties returned after a break, Judge James Linn denied the defense motions.

Next, he heard aggravating and mitigating evidence from the attorneys, which lasted late into the day before the judgment was given.

Finally, as the day was concluding, Judge Linn sentenced Smollett for the Class 4 felony as follows:

The judge did not suspend jail time as requested by the defense attorneys and Smollett was remanded to custody.

As he was being walked away, Smollett was defiant, shouting to the court with a raised fist, “I am not suicidal, I am innocent.”

Prior to issuing the sentence, Linn gave a lengthy explanation for his decision.

“There is nothing I can do to you today greater than the damage you’ve already done to yourself,” he said.

As Linn highlighted Smollett’s social activism, he said, “The hypocrisy is just astounding.”

When the judge was expressing his views regarding Smollet’s motivation to commit the crime, he said, “I don’t think money was your motivation. … I think you craved the attention.” You have a lot of good sides to you, but you’re “arrogant, selfish, and narcissistic.”

“I believe you did damage to real hate crime victims,” Linn admonished as he said he hoped future victims do not feel hesitant to come forward.

The judge highlighted the planning that went into committing the offense, saying it was not a crime of impulse, nor was it a crime of opportunity, but one of “premeditation.”

Beyond your good side, “you have a dark side,” Linn said as he went on to revisit all of the evidence before the court.

During the hoax, “You put the noose around your own neck. … You lied to the police when they showed up at your place and you’ve been lying ever since. … Your plan worked until it didn’t.”

“This is unbelievable since you’ve been involved in social justice causes,” Linn said.

The work of the Chicago Police Department in this case was “extraordinary,” according to the judge. They solved the case and discovered “you were not the victim of a hate crime.”

“The damage you’ve done to yourself is way beyond anything I can do to you. … You’ve become toxic in your own workplace. … Your very name has become an adverb for lying,” Linn said as he described the fact that comedians are having a field day with Smollett’s circumstances.

“I don’t think there is anything funny about homophobic hate crimes,” he said. Your testimony was “pure perjury,” which is a mitigating factor in sentencing.

“I’m looking at everything in its totality,” including others fighting for social justice, Linn concluded as he issued the sentence.

Afterwards, Smollett was defiant. “I am innocent and I’m not suicidal,” he said, repeating himself several  times as he stood before a somewhat stunned courtroom.

His attorneys told the judge of their plans to appeal the sentence, and sought to defer jail time for Smollett. However, the judge denied the request and Smollett was remanded to custody.

As officers led him from the courtroom his theatrics continued as he raised his voice along with his fist claiming his innocence and declaring that he was not suicidal.