The judge promised that he would 'deal with' the senders ... 'I wouldn't want to be those people' 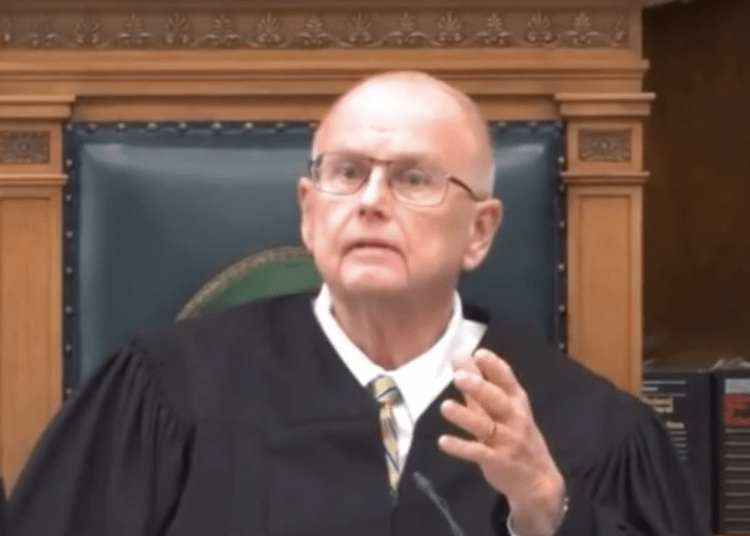 KENOSHA, Wis. — Judge Bruce Schroeder who is overseeing the high-profile Kyle Rittenhouse trial has received “thousands” of vile communications viciously criticizing his actions, even going as far as threatening violence against him, his family, and Rittenhouse if acquitted. He is being guarded by police around the clock due to the voluminous threats as the trial continues on, Post Millennial reported.

An email from last Wednesday read, “Wow way to name a white skinhead hot head to be a judge. No wonder they burn down your city.”

“Wow way to name a white skinhead hot head to be a judge,” an email reads | Source: Daily Mail

Another one addressed to “Your Honor” says: “I didn’t know that under your black robes of justice you wear a white robe of the klan. There is no way a fair trial can be heard under your supervision. Better yet, resign.”

One email from an “out of state Wisconsinite” addressed to “Your Honor” accuses Schroeder of being a Ku Klux Klan member | Source: Daily Mail

Among the vile comments saying Schroder should be dismissed and disbarred, is one individual who said if they ever met in person, he would “spit directly into [his] face, regardless the cost.”

However, one of the most disturbing messages to the Kenosha judge was a violent email that threatens the lives of Schroeder’s children, promises “pay back,” and states that Rittenhouse “won’t live long” if acquitted:

“So I can’t call the wounded men victims, says ur judge one day hope his kids become victims to the most heinous homicide known to man so he feels the pain an we will call his kids not victims but b******s an descendent of c*** family an father figure. Racist b*stard god will pay u back for ur statement.”

The judge has been required to continually admonish the prosecution team for actions that some argue could be grounds for a mistrial, like referring to the defendant exercising his 5th Amendment right against self-incrimination by “remaining silent” upon arrest.

Furthermore, Schroeder was amazingly chided for his patriotic “God Bless the USA” ringtone, as well as a comment acknowledging military veterans in the courtroom on Veteran’s Day.

Some of the emails referenced his ruling in October that allowed the defense to refer to those who were shot as “rioters,” “looters,” and similar language, while disallowing the prosecution to refer to the three Black Lives Matter rioters as mere victims, Post Millennial reported.

Schroeder referenced the emails last week, saying he has received “thousands of communications,” and promised that he would “deal with” the senders. “I wouldn’t want to be those people,” he declared, according to the Daily Mail.

Schroeder’s email address has been widely spread since he routinely receives motions sent directly to him. “Believe me I wish fewer people had my email address these days,” he said.