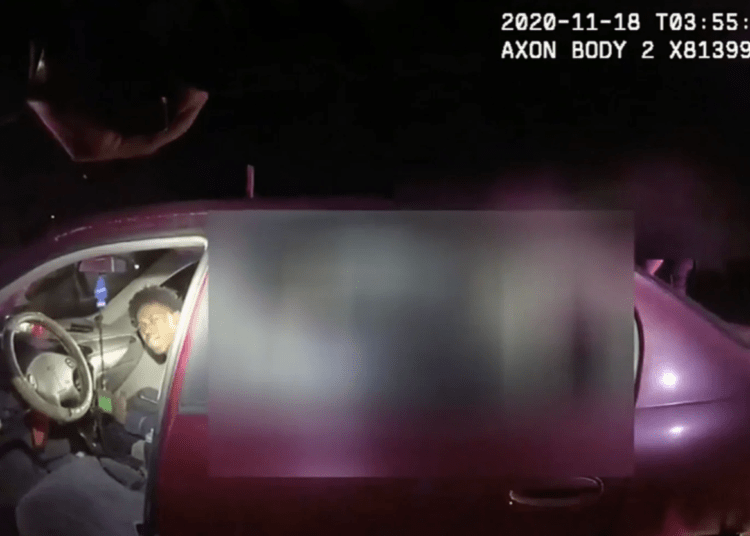 JSO released a statement saying, “This case continues to be investigated, however, we are proactively releasing the body-worn camera footage of the police-involved shooting as a result of the Medical Examiner advising that the suspect suffered from a self-inflicted gunshot wound.”

The Medical Examiner’s Office did not specify whether Devon Tilman Gregory died from the self-inflicted injury or from one of the rounds that police fired at the vehicle he was occupying during the Tuesday night incident, First Coast News reported.

Officers say they pulled over a vehicle with three people in it because the car failed to maintain a single lane, Jacksonville Sheriff’s Office Chief of Investigations T.K. Waters said in a statement after the shooting.

Body camera footage shows officers approaching the vehicle and asking the occupants if they have marijuana in the car.

“You were smoking a little bit ago or something?” an officer says, explaining that he had detected the smell of marijuana and had probable cause to search the vehicle.

“Is there anything in the car we need to worry about? You guys mind if we check it out real quick and get you on your way?” the officer says before the driver is removed from the vehicle and handcuffed while the other two passengers remain in the car.

A second officer looks into the car and sees Gregory, who appears to be smoking something, begin to reach under the seat, Fox News reported.

Officers tell him repeatedly to stop. However, Gregory is non-compliant, insisting that he’s reaching for his phone.

Gregory continues to ask if he can “please” get his phone and continues to reach. At one point, it appears he has a cellphone to his ear. Officers also remove the second passenger from the vehicle.

“Relax, man. Hey, relax. Pull your hand from under the seat,” one officer says, before the situation begins to escalate again after several minutes.

Gregory can be heard yelling statements that are consistent with a suicidal person.

“Listen to me. I promise you if you raise your hand with nothing in it, you will not get hurt,” one officer says.

The 19-minutes of footage shows an officer approaching the vehicle with a police K9, as Gregory yells “Leave me! Leave me!”

Gregory puts his head down between his legs and a gunshot is fired from inside the vehicle, as the teen’s head jerks backward.

Officers then begin firing at the vehicle multiple times.

Four officers were place on administrative leave after the shooting, which is standard protocol for the department.

Gregory’s family viewed the video before it was released on Thursday, First Coast News reported.

Body-worn camera video is typically released only after an extensive investigation by both police and the State Attorney’s Office, the news organization reported. So by releasing the video “proactively,” the agency appears to be trying to mitigate potential demonstrations and civil unrest, experts at Law Officer concluded.