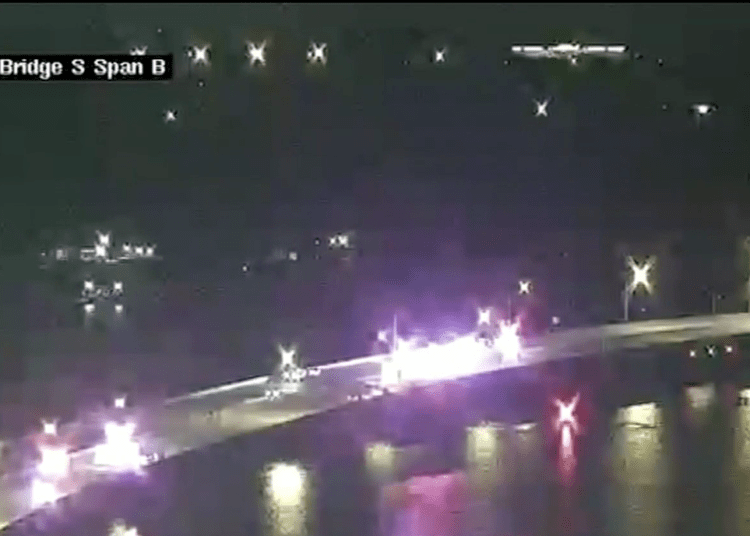 The suspect jumped from the Dames Point Bridge while trying to evade police. (Screenshot News 4 Jax)

JACKSONVILLE, Fla. – A gunman is dead after shooting a Jacksonville police officer and leading law enforcement authorities on a lengthy 20-mile chase Sunday night before leaping to his death from the Dames Point Bridge, according to the Jacksonville Sheriff’s Office.

JSO said the sequence of crimes began with an attempted burglary at a residence on Old Middleburg Road about 10:50 p.m., News 4 Jax reported.

Officers dispatched to the scene encountered gunfire from the suspect. One officer was struck and the gunman fled in a stolen vehicle, according to the Sheriff’s Office.

Law enforcement personnel engaged the suspect in a vehicle pursuit. The chase lasted about 20 miles until the perpetrator crashed on the Dames Point Bridge, hopped out of the stolen car and leaped into the river below.

The bridge remained closed during law enforcement operations and the ongoing search for the disappearing suspect.

Early Monday morning JSO said they found the man’s body and the gun used in the shooting, according to the news outlet.

The officer officer struck by gunfire was saved by body armor, JSO confirmed, simply requiring treatment at the hospital for severe bruising.

No further details were immediately available as the investigation remains ongoing.