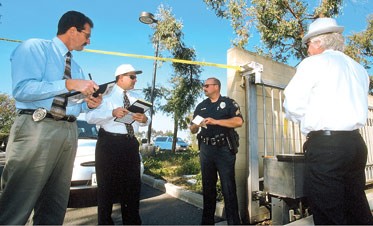 Last issue, I began a discussion on investigative ethics. It contrasted the philosophical definition of “ethics” often used in the academic world with the real-life definition of ethics where police officers confront the “claw and the fang,” world of drive-by shootings, murders, the affects of drugs, suicide, widespread homeless, AIDS, domestic violence, poverty, child abuse, etc.

The reason law enforcement is held to such high ethical standards is found in our history, which is steeped in the traditions of Judeao-Christian religious morality and philosophy. Foremost among these traditions is that American democratic society and the laws that govern citizens are firmly grounded in what has come to be known as social contract theory, where each member of society gives up a certain amount of freedom through the support and protection of the community. Essentially, this is the basic rationale underlying the U.S. Constitution and the Bill of Rights. In other words, in a broad sense, individual members of society determine the standard for what’s moral or immoral, and what’s lawful or unlawful.

The basic principal of law officers serving and protecting the public and the various law enforcement powers to arrest, detain, use force, search people, etc. has its foundation firmly rooted in social contract theory. The balancing of a person’s right to individual freedom against the collective security offered by government is the difficult task law enforcement officers face each day.

Our Duty to Protect
In 1956, the California Peace Officers Association and the Peace Officers Research Association of California developed a law enforcement code of ethics that was adopted by the International Association of Chiefs of Police (IACP) at its 1957 conference. At that same conference, the IACP also adopted the “Canons of Police Ethics,” which emphasized that the fundamental duty of law enforcement officers is to “serve mankind and to protect the innocent against deception, the weak against oppression or intimidation, and the peaceful against violence or disorder.”

This basic responsibility trumps all other police-related duties. That’s why protecting a crime scene is secondary to removing an injured victim, even though vital evidence may be destroyed in the process.

Example: I recently had dinner with Johnny “the chin” Evans (he has a cleft in his chin like Kirk Douglas, so naturally he was dubbed “the chin”). Evans opened up to me and shared a story about when he was disappointed about a decision he made during an investigation.

Evans was commander of the vice and narcotics squad in a major northeastern city. He was leading a narcotics raid on Christmas Eve in one of the city’s housing projects. He and his men had been serving search warrants all week, sometimes three or four a day, and all were by forcible entry.

You know how it works: A bunch of unmarked police cruisers speed down a street, car doors fly open and everyone jumps out at once. You run up a couple flights of concrete stairways until you get to the right door. “Police, search warrant!” No one ever answers, and the process of battering down the steel door with a sledgehammer or ram begins.

Evans said the door popped quickly, the shotgun man made his sweep, and all of them got in safely. The only people inside were a young mother and her three children. Evans’ people had gotten a search warrant a few days before hitting the place, but to be on the safe side, they sent a snitch up to buy a couple hours before they went in. The snitch had told them there were hundreds of vials of crack in the house, and the guy they were after, “Big Henry” Thompson, was there.

The woman told them Big Henry had just left to get some milk for the kids. Evans and his guys searched all the usual places, but they didn’t find so much as a single vial. So, they began searching the usual unusual places, such as the inside of the television set and the ice cube trays.

The women and her three children huddled in one corner of the living room near the Christmas tree. It was the only place that hadn’t been searched thoroughly. It began to snow, and Evans looked out the window while wondering if he would get home in time to celebrate Christmas Eve with his wife and children.

One of his guys came over to him and said, “Lieu, we’re coming up dry. Do you want us to search the presents?” The narc motioned with his head over to the Christmas tree where a bunch of neatly wrapped presents surrounded its base. “It’s the only place we haven’t looked.”

Evans looked over at the seven or eight guys with him and said, “Yeah, open them up,” and a couple of his men began unwrapping the presents.

Evans said the woman began howling in his general direction. One of the little girls, an eight-year-old with long pigtails and the largest brown eyes he’d ever seen, began sobbing. He walked over and reached out his arms to comfort her, but she said, “No, no, no, stay away from me!” She was trembling in fear, and tears were streaming down her face. She was terrified.

Evans said when he looked into her large, brown, terrified eyes, he realized he’d lost his ethical base. He told me he remembered thinking it wasn’t supposed to be like this children were supposed to be running to him for protection, not running away scared of him.

Evans had such a heavy heart, he couldn’t stay in the apartment any longer. He ran down the stairs and ended up walking along a city street in the snowstorm until one of his men came after him and convinced him to get in the cruiser. Evans said he’d left the apartment because he didn’t want his men to see him crying. The fact that his guys found 300 vials of crack in one of the Christmas presents didn’t make him feel any better. It made him feel worse.

The Ethical Dilemma
Didn’t the officers follow the law? Weren’t they just doing their job? After all, they had obtained a search warrant and made a controlled buy hours earlier. Think of the harm 300 vials of crack cocaine can have on people!

Evans was upset with himself because he and his men searched the presents under the tree in front of the kids. They were in a hurry and wanted to get home to their own families. They could have taken the woman and children into another room while they searched. They had forgotten that, in addition to taking the drugs off the street, they had a primary ethical responsibility to protect the innocent the children from the psychological trauma of what they needed to do.

Ethics is often not what we do, but how we do it. Be safe out there.

*Parts of this article were excerpted from the author’s book, The Path of the Warrior, available from Looseleaf Law Publications.

Dr. Larry Jetmore, a retired captain of the Hartford (CT) Police Department, has authored five books in the field of criminal justice, including, Path of the Warrior. A former police academy and SWAT team commander, he earned his Ph.D. at Union University in Ohio, plus master's, bachelor's, and associate's degrees in Connecticut. Dr. Jetmore is the director of the criminal justice program at Middlesex College in Middletown, CT and a full-time faculty member.