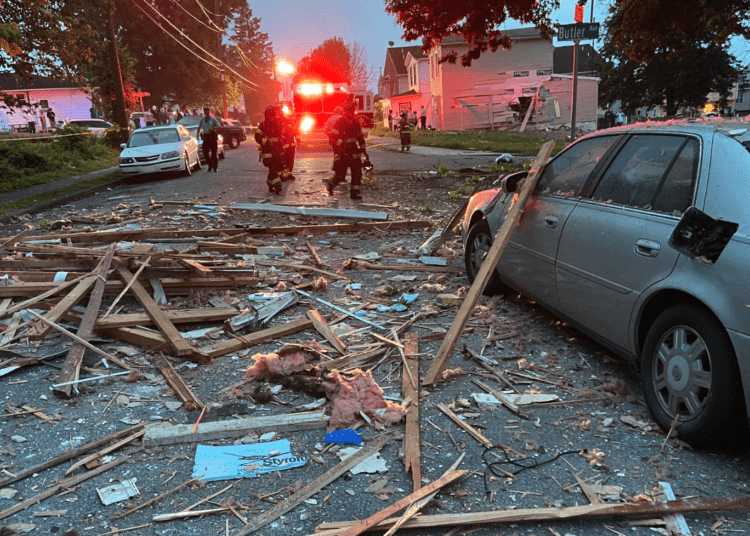 POTTSTOWN, Pa. – Four people were killed and two others injured when an explosion demolished multiple homes in Pennsylvania Wednesday night, according to authorities.

The blast destroyed three houses in the borough of Pottstown, approximately 40 miles north of Philadelphia. Police said two other people may be unaccounted for, CBS Philly reported.

County officials believe a gas leak may have caused the explosion. The identities of those who died have not been released by authorities.

“I was in my room chilling. I was upstairs, and the next thing you know, I just heard a big boom like a bomb went off or something. It just shook the whole house,” Kaleef Blackwood, a man who said he lives near the destroyed homes, told a local news outlet.

Images show debris from the blast scattered throughout the neighborhood.

At the scene of what appears to be an explosion on N. Washington Street in Pottstown. 1 house entirely gone, other houses damaged. No flames, smoke or smell of gas. These are the shots I got before police kicked me out. pic.twitter.com/r7gEgepQRx

Moreover, several additional residences as well as automobiles in the area sustained damage to varying degrees.

The windshield of this car 4 doors down was cracked by the explosion on Hale Street in Pottstown, perhaps by this piece of roofing sitting in front of it. Lots of insurance claims in this neighborhood’s future. pic.twitter.com/KZasBFnoLb

Drone footage from the location of the explosion showed the massive debris field caused by the eruption, the Washington Examiner reported.

The massive catastrophe drew a response from several agencies, including the Pottstown Police Department, Pennsylvania State Police, fire officials, ATF, and the Red Cross, according to reports.

An unidentified employee with the US Alcohol, Tobacco $ Firearms confers with Pottstown Fire Chief Frank Hand at the mobile command center set up in the parking lot of Pottstown High School. pic.twitter.com/ie33QgmQRu

Pottstown schools were closed Friday as a result of the explosion, according to John Armato, director of community relations for the Pottstown School District.

John Armato, director of community relations for @pottstownschool says all classes for students and staff are cancelled tomorrow, Friday due to the explosion on Hale Street in Pottstown, just 2 blocks from the high school, middle school complex. pic.twitter.com/X1t2px5tMe