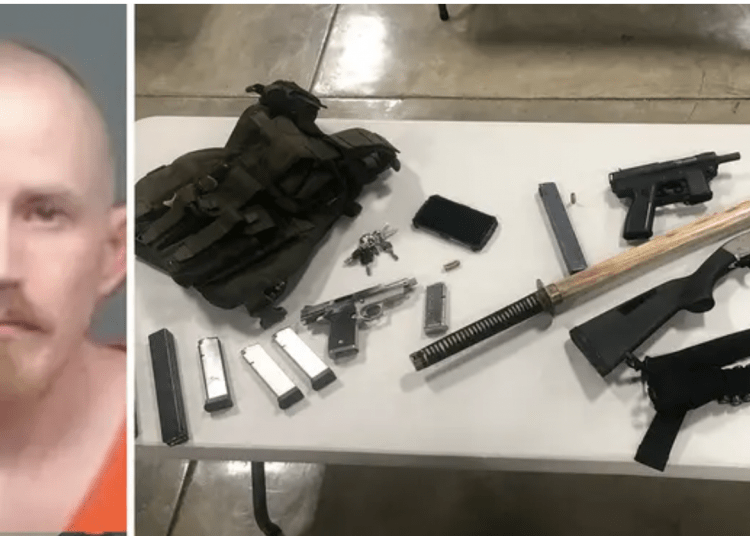 TEXARKANA, Texas – Police in Texas arrested a man earlier this month after they said he took to Facebook Live to stream his quest for a lone police officer to “ambush and execute.”

According to the Texarkana Police Department, authorities received several 911 calls reporting that Aaron Swenson, 36, went live on Facebook on the night of April 11. During the broadcast he reportedly described his intentions to kill a police officer, BuzzFeed News reported.

As a result, police monitored the live feed. Before long, they were able to identify Swenson’s whereabouts and sent several officers to the area. When they confronted Swenson, he led law enforcement officers in a vehicle pursuit.

During the chase, an officer anticipated the route Swanson was likely to take and deployed a spike strip, which immediately deflated one of his tires. However, he continued to flee at a high rate of speed until coming to an eventual stop on Highway 82 in Hooks, Texas.

Swanson sat in his vehicle with his music blaring and ignored officers’ commands to exit. After approximately 25 minutes, he stepped out of his vehicle and surrendered, reported TXKToday.

According to police, Swenson was wearing an armored vest and had several loaded weapons in his truck at the time they took him into custody.

Swenson has been charged with making terroristic threats against a police officer, evading arrest, and unlawfully carrying a weapon.

For months leading up to the incident, Swenson had been sharing memes from boogaloo pages on Facebook. In this internet subculture, boogaloo is slang for an upcoming second civil war, and members share anti-government, anti-law enforcement, and pro-gun messages, BuzzFeed reported.

According to the Network Contagion Research Institute (NCRI), which tracks how hate moves from social media to the real world, the boogaloo movement got its name from a joking reference to the 1984 breakdancing film Breakin’ 2: Electric Boogaloo, which was criticized as being too close to the original film. In far-right meme culture, the boogaloo is a reference to an uprising similar to the Civil War, the so-called “Civil War 2: Electric Boogaloo.”

Swenson seemed particularly affected by boogaloo posts about the death of Duncan Socrates Lemp, a 21-year-old who was killed by police in Maryland as they served a warrant for alleged gun offenses earlier this year. On March 13, the day after Lemp’s death, Swenson changed his profile picture to a photo of his torso where he is wearing a Hawaiian shirt with an armored vest over it, a sort of uniform for boogaloo boys. The photo included the hashtag #HisNameWasDuncan, according to BuzzFeed.

“Well, as I have no real important reason to live a long peaceful(bleh) life,” Swenson wrote on Facebook, “How ever this [Maryland] incident goes, I am eager to be a part of a response. If it should go that direction, anyone in [Northeast Texas] that wants to form up, hit me up!”