Koby Francis slipped his cuffs, retrieved a second weapon and shot the officer to facilitate his escape, police say 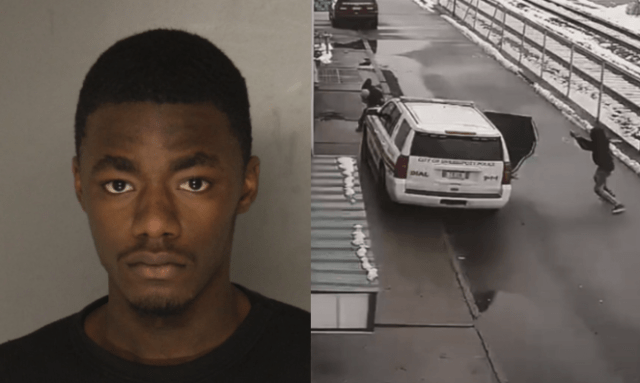 Authorities captured Koby Lee Francis, 22, on Tuesday, more than a week after he is accused of shooting a Pennsylvania police officer after he was arrested. (Allegheny County Police Twitter)

Francis, 22, was taken into custody by U.S. Marshals at a Clarksburg, W.Va., apartment complex, the Allegheny County Police Department said in a news release. His arrest came just over a week after he was seen on video shooting Athans outside a police station, CBS Pittsburgh reported.

It is not clear who lived at the apartment and how Francis got there.

“We were able to verify that Francis was at this location. We hit the location with a SWAT team just prior to six o’clock this evening,” said Harrison County Sheriff Robert Matheny on Tuesday.

“It was almost instantaneous. When the SWAT team arrived at the apartment, they caught him in custody within seconds,” he added.

Video of the Dec. 20 incident released by investigators shows Athans opening a passenger door to his police unit where Francis is seated in the back. Francis is seen opening fire several times with a second weapon he kept hidden even after he was searched earlier.

Authorities said he was able to slip his cuffs and situation his hands in front of him, Fox reported.

The officer returned fire but there was no evidence that Francis was hit.

However, things were different for Athans, 32. The four-year veteran of the department, was wounded in the neck and shoulder. As a result, he was taken to a hospital for treatment, but has since been released.

The events unfolded after Francis was arrested and served a protection order earlier in the day, Law Officer reported. He was found sitting in a parked vehicle when authorities found a handgun inside and arrested him, police said.

Consequently, the fugitive is now charged with criminal attempt homicide, escape, flight to avoid apprehension, aggravated assault and firearms violations in connection with the shooting.

Two people accused of hindering the apprehension of Francis turned themselves in for a Tuesday court arraignment, CBS Pittsburgh reported.

Francis will remain in a West Virginia jail while he awaits extradition to Pennsylvania.