Grief-stricken officer crumbles to the ground after fatal shooting

The deadly encountered occurred during a Juneteenth parade 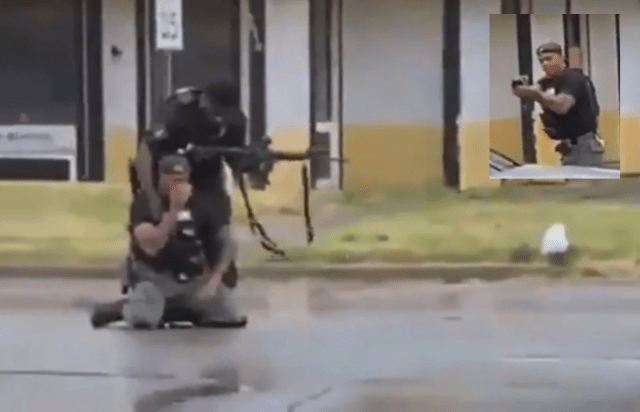 FLINT, Mich. — A video full of drama and raw emotion shows the moment a Michigan police officer fatally shot a 19-year-old female suspect at a Juneteenth parade and then crumbles to the ground in tears afterward.

Briana Sykes was identified as the woman who drove up and fired at the officer as he worked a traffic point during the Flint parade on Saturday, WJBK-TV reported.

The unnamed officer is seen on the footage yelling for Sykes to drop the weapon before he opens fire into the vehicle. Officers provided medical aid to Sykes as the grief-stricken officer is seen going to his knees in anguish, New York Post reported.

Sykes later died at a nearby hospital, according to authorities.

“I kind of feel like him dropping, it was the devastation of the whole situation,” a witness told WJBK-TV. “I feel like the police was doing his job. He had a life to protect. Not only his, but we had a parade full of kids.”

I found a longer version of Saturday’s #Flint fatal police shooting bystander video. The 19-year-old woman who was killed has been identified as Briana Sykes. Sykes is accused of initiating gunfire with the officer. MI State Police are investigating. pic.twitter.com/y3NN7PVwiV

The fatal encounter occurred about 2:14 p.m. Saturday on Saginaw Street during the Champions Parade, which aligned with the new Juneteenth federal holiday, the Post reported.

“Preliminary investigation indicates the officer, who was working a traffic point for the Juneteenth Celebration Parade, was fired upon by the lone occupant of a vehicle who drove up to him at the traffic point. Upon taking fire, the officer returned fire, striking the suspect,” Michigan State Police said.