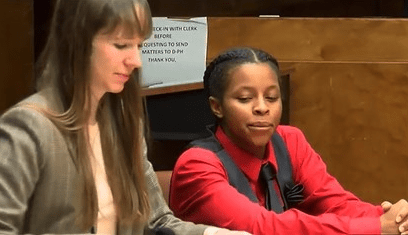 BAKERSFIELD, Calif. – A former McDonald’s worker in California who is accused of spitting on a hamburger that was served to a uniformed police officer will stand trial, a judge ruled.

Prosecutors allege that while working at a McDonald’s in Bakersfield the then-21-year-old rubbed a hamburger bun on the floor and then spat on it as she prepared a meal for a city police officer at the drive-thru, KGET reported.

Moreover, she shouted, “Black lives matter” and referred to officers as “pigs,” according to Deputy Carly Snow, who investigated the incident.

The officer in question did not get sick from eating the burger and did not seek medical treatment, Snow testified.

A judge dismissed an earlier misdemeanor battery charge but at a hearing on Thursday ordered her to go on trial for the felony count. As a result, her arraignment is scheduled for March 23.

Hargrove’s attorney, Lexi Blythe, argued that there isn’t enough evidence against her client because her back was to the camera while she was making the officer’s order, KGET reported. Blythe also said it’s unknown if cleaning products had recently been used on the floor.

Prosecutor Gina Pearl told the judge that one of Hargrove’s coworkers said they heard her draw saliva into her mouth as she was making the food. Video also caught Hargrove wiping her mouth afterward, Pearl said.

The felony charge against co-defendant Herman Trevino, who witnessed Hargrove’s actions but didn’t stop her from serving the burger or inform management, was dismissed in exchange for agreeing to testify at Hargrove’s trial.

Prior to this incident, Hargrove had issues with local police.

Hargrove filed a federal lawsuit against the Bakersfield Police Department alleging that she was beaten and arrested in 2017 by two officers while riding her bicycle, NBC News reported.

The case went to trial, and a jury ruled in favor of the City of Bakersfield.