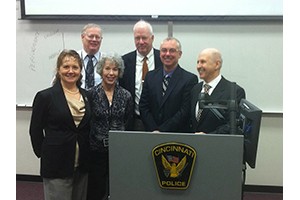 After having time to reflect on and absorb the class, I really hate to think of how many good, honest officers who have been disciplined, fired, sued and even jailed because the investigators and defenders of their incidents didn’t have this training.

Dr. Bill Lewinski, Ph.D., leads the Force Science Institute. If you’re not familiar with his work, let me tell you the three points that matter the most to me.  One, he’s directly responsible for the most important research available that can, will and has defended LEOs involved in controversial incidents. Two, he‘s an absolute master of what he does. Three, he has an incredible passion to help officers, and he deeply and sincerely cares about us.

The scientific and research credentials held by the Force Science team far exceed any other law enforcement training organization in the world. For details on those, I’m going to refer you to www.forcescience.org.  To put it bluntly, I don’t have the space available to list all of the incredible people involved, let alone their credentials, that makes Force Science the dominating leaders in this highly specialized and vitally important training and research.

My friend, firearms mentor and seminar partner Dave Spaulding often uses the phrase, “You don’t know what you don’t know.”  This blunt reality really comes to life as the course unfolds. The Force Science Certification Course fills an essential void for the student. The weeklong event teaches you how to take a rapidly evolving, officer-involved use-of-force incident that lasted only a few seconds, and break it down to the microsecond as to what events occurred when and why. In analyzing and articulating the dynamics of an altercation, this class teaches you what you must know and how to articulate it to not only the public, but to administrators, jurors and judges as well.

Academically, the Force Science Certification Course is a lot of work and a lot of hours. Don’t attend thinking you’ll be out partying after hours. You’ll be married to the three-ring binder that they give you on the first day, for the duration of the course. However, it’s an achievement you will always treasure, and it will provide training that is absolutely indispensable for the groups listed in the first paragraph of this article.

In addition, of course, Dr. Bill Lewinski, Ph.D. the driving force behind the Force Science Institute and arguably the best LE speaker I’ve ever had the privilege of meeting.

If I were to be on the other side of this article and had never attended this class, I’d be more than a bit intimidated by the aforementioned masters of academia. I’d be skeptical that I’d even be able to communicate with or understand the teachings of these instructors.  That is not a problem with the Force Science team.  They bring highly complex subjects and explain them in down-to-earth terms. Anytime you have a group of speakers, inevitably, some will be better than others. However, all the speakers were obvious subject matters experts and presented their material in an easy to understand, and in some cases, a highly entertaining fashion.

The following are just a few of the subjects covered in the Force Science Certification Course:

As we all know, the vast majority of officers do the right thing in use-of-force incidents. As the US Supreme Court so eloquently and accurately stated in Graham V. Connor: “Officers are often forced to make split-second judgments in circumstances that are tense, uncertain and rapidly evolving – about the amount of force that is necessary in a particular situation.” Without having the ability to thoroughly investigate use-of-force incidents from a scientific perspective leaves you with an incomplete investigative conclusion.  Having the ability to scientifically investigate, and then competently articulate your findings, can be invaluable to your officers and the financial well-being of the jurisdiction they serve.  Departments that do not have a Force Science Certified Force Analyst on staff are putting themselves at unnecessary legal and civil risk.

I’d also like to extend a big thank you to Lt. Christine Briede and the rest of the Cincinnati (Ohio) Police Department’s academy staff who hosted the October event.  Truly, the staff is a class act and an obviously highly dedicated group of professionals. I’ll close with final note to Cincinnati Police Chief James Craig. Chief, your academy staff were great hosts and they went out of their way to accommodate the attendees. I’m quite confident I can speak for all the attendees in saying they left us with a very positive opinion of the Cincinnati PD.

For more information on Force Science and their outstanding research, visit http://www.forcescience.org.

Share and speak up for justice, law & order...
Tags: editorialTraining