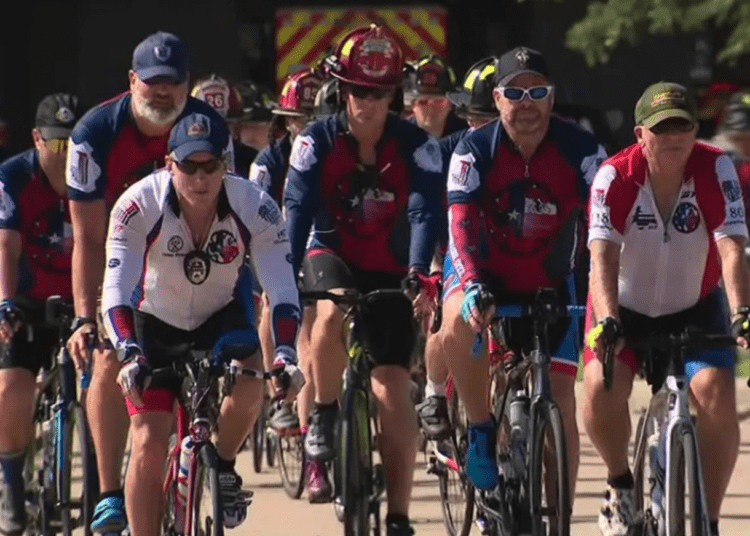 First responders from across the U.S. are riding to remember fallen partners. (Screenshot KDFW)

HOUSTON – First responders from many locations throughout the U.S. are cycling across Texas this week to remember their fallen comrades.

The grueling ride covers 500 miles and is honoring 32 Texas first responders who died in 2021. Cyclists came from as far away as Boston for the ride across the Lone Star State, reported KDFW.

“This year’s ride started in Texarkana on Sunday,” rider Rob Hyatt told the news outlet. “We will finish in Houston on Friday. It’s roughly six days and 500 miles.”

The group is part of the Texas Brotherhood Riders. Their mission is to never forget partners who died in the line of duty.

“We always want to honor our fallen brothers and sisters,” Dallas Fire-Rescue Chief Dominique Artis said. “It’s important that we don’t forget and always pay homage to them as well as their families.”

The names of the fallen are featured on the back of the rider’s jerseys, Fox News Digital reported.

The cyclists are part of the Texas Brotherhood Riders, whose mission is to never forget their partners who died in the line of duty.  (Screenshot KDFW)

The 2017 ride honored the four Dallas police officers and one DART officer who were ambushed and murdered in July 2016, according to KDFW.

Not long after the horror in Dallas, six officers from Baton Rouge, Louisiana, were shot. Three of the officers died while the others were hospitalized.

Corporal Nick Tullier of the East Baton Rouge Sheriff’s Office was critically wounded in the 2016 shooting. He died earlier this year, having never recovered from his injuries, Law Officer reported.

First responders from across the U.S. are riding bikes through Texas to remember fallen police officers, firefighters and paramedics. (Screenshot KDFW)

“I love y’all so much for giving us this opportunity,” said Dallas Police Officer Scott Ash, who has been riding since the ambush. “For allowing us to meet you and really make that connection. Because it means so much to all these guys because they’ve all lost friends and family.”

Another rider from Central Texas commented on the value of the event.

“We say, ‘never forget’ when a partner dies in the line of duty,” said a retired police officer from the Austin area. “Well, this is one way to remember their sacrifice. I have attended too many police funerals. When I listen to ‘Amazing Grace’ played on the bagpipes, I am motivated to pedal my bike, sometimes with a tear running down my cheek, as I visualize the faces of fallen honors that I’ve been blessed to know.”