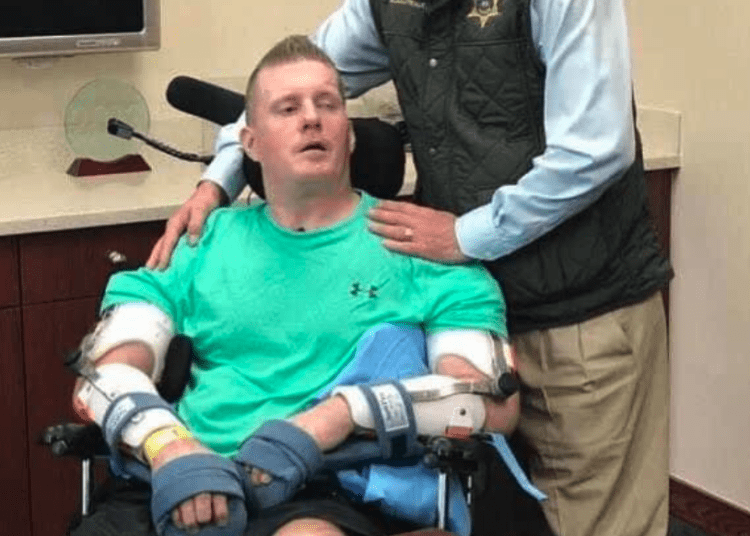 BATON ROUGE, La. — Corporal Nick Tullier of the East Baton Rouge Sheriff’s Office died on Thursday. He was critically wounded during an ambush attack in Baton Rouge in July 2016.

Tullier and his loved ones have been battling for nearly six years, hoping that some semblance of rehabilitation was achievable. Ultimately in the end, his injuries were simply too much to overcome.

His family announced Thursday morning on the “Nick Tullier Strong” Facebook page that he passed away, WDSU reported.

“God has gained his best angel this morning,” the post read.

Tullier was one of three other law enforcement officers from the Baton Rouge Police Department and the East Baton Rouge Parish Sheriff’s Office wounded by gunfire.

The gunman was identified as Gavin Long. He was fatally shot by a SWAT officer. Investigators said Long emailed a three-page manifesto to an Ohio man just hours before the ambush murders.

After he was shot three times, Tullier, a father of two, spent the rest of his life in hospitals. He was struck by gunfire in the back of the head, shoulder and abdomen, according to his father, Fox News reported.

James Tullier had been documenting each of the 2,000-plus days his son spent in hospital care following the ambush. In each post, he reminded his Facebook followers to pray for both his son and “Members of the Blue Family.”

“I am heartbroken at the passing of a true hero, Cpl. Nick Tullier. Nick’s injury was a result of his selfless actions to courageously answer the call to protect and serve. For nearly six years he has defied all odds in recovery through his unwavering tenacity. I have no doubt, that he was also greatly carried by the love, prayers and faith of his family, friends and colleagues. In watching Nick’s parents, James and Mary, nobly and lovingly dedicate their lives to Nick’s recovery, it is not hard to see how he grew to become such an honorable man. My heart and prayers go out to them, Nick’s sons Gage and Trenton, and all of his family. Nick’s story certainly does not end here. His legacy of service, sacrifice and faith lives on through all of those he touched. We will be forever grateful and always remember and honor our hero, Nick Tullier.”

“Donna and I are deeply saddened by the passing of Corporal Nick Tullier. Six years ago, Nick selflessly defended his fellow officers, as well as the Baton Rouge community, in the face of a horrendous, targeted act of violence. The sacrifices made by Corporal Tullier, along with Deputy Garafola, Officer Gerald, and Corporal Jackson, weigh continuously on my heart. They were true heroes who fiercely loved the community they vowed to protect and serve. Nick’s road these past six years was more difficult than words can describe, and yet he inspired us all with his drive to survive and light of hope. Equally inspiring is his loving family, who gave everything to Nick’s recovery. Our prayers are with Nick’s family as they go through this heartbreaking loss.”